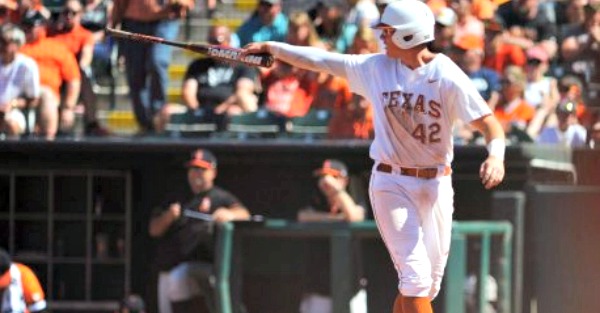 Kacy Clemens, a first baseman with a famous surname, was selected in the eighth round of the Major League Baseball draft by the Toronto Blue Jays.

Clemens, 18, is the son of Roger Clemens, widely acknowledged as one of the greatest pitchers ever.

His son isn’t bad, either. The senior, who played for the Texas Longhorns, blossomed in 2017, and a University of Texas press release detailed his accomplishments. He led the team in nearly every hitting category and played a sterling defense at first.

Senior first baseman Kacy Clemens has been selected by the Toronto Blue Jays in eighth round, 249th overall, on Tuesday afternoon in the 2017 Major League Baseball Draft.

His  famous father won 354 games over a 24-year career and won more Cy Young awards (seven) then any pitcher in baseball history. He should be a shoo-in for the Hall of Fame but has failed to gain entry so far because of allegations of steroid use made by his former trainer. Clemens has denied the allegations.