The laundry list of nicknames for Auburn first baseman Sonny DiChiara is approaching Babe Ruth's stratosphere and the colossal slugger's clout is constantly growing each game he plays in Plainsman Park.

There's a reason for that. Through 45 games, DiChiara has set the college baseball world on fire and been the best hitter in the country. He's been pivotal in turning a sub-.500 team last year into a top-20 one in 2022, and he's got Auburn set up to vie for a deep postseason run this year.

Let's get to know the 263-pound beast who also has the best walk-up song in the NCAA. 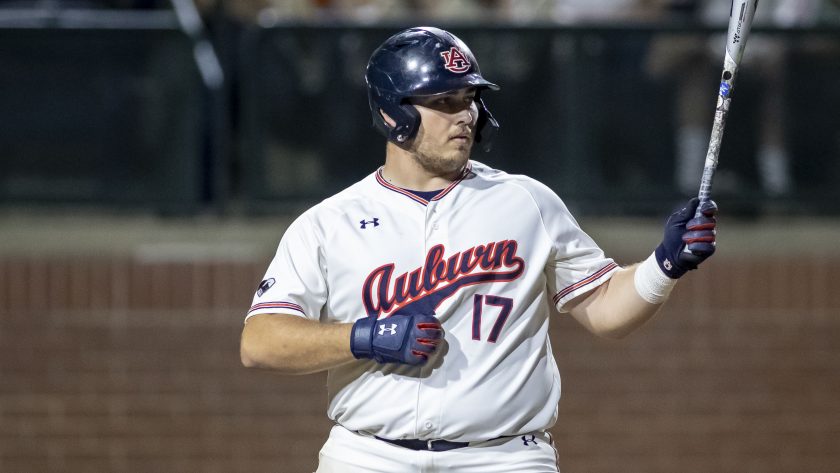 The legend of Sonny DiChiara first began at Samford University, where the Hoover native was a relatively unknown home run hitter.

He hit 41 home runs across three seasons at Samford, including a school-record 21 as a freshman All-American in 2019. But in two full seasons (his 2020 campaign was only 15 games due to the coronavirus pandemic), he never hit higher than .300.

He transferred to Auburn for his senior season (despite leaving the school where his girlfriend played volleyball), and all he's done this season is become the second coming of Ted Williams. His .436 batting average is the highest among all qualified NCAA hitters. His 13 home runs leads the Tigers by a wide margin.

He's a good bet to win the Golden Spikes Award given to the nation's top player, an award that's never been given to an Auburn player.

So, how has he developed into an SEC superstar? He says velocity has something to do with it.

"The SoCon was a great baseball conference, but I think one of the major differences is the consistency in velocity," DiChiara told D1Baseball.com.

"In the SoCon, they've got four or five guys that can run it up there, but after that, it falls off. So having the consistency in velocity, not having to change from 95 to a guy throwing 80, has helped me. When you see better velocity with a hard slider, it's easier to react to it."

This is gonna be a thing this year. Sonny DiChiara, the colossus of clout, with the best walk-up song. Then he roped a double. Auburn currently leads Clemson 6-3 with 11 hits to their 4. #wareagle pic.twitter.com/A65onfgNJX

Most college hitters pick their favorite song as their walk-up song. Maybe it's the latest record from Post Malone. Maybe it's some pop anthem from Taylor Swift.

Sonny DiChiara is a bit different.

Every time he makes his way from the on-deck circle to the batter's box, the entire stadium begins clapping their hands to Louis Prima's "C'é La Luna Mezz'o Mare." It's the same song Mama Corleone sings at the wedding in "The Godfather."

It's a song that he's used since his high school days.

"I had it in high school, my first game of varsity, that was what I had," he told D1Baseball.com. "There's not really a rhyme or reason to it, but I just liked it and the crowd started clapping to it the first game I had it, so I just stuck with it."

Sonny D has become much more than an elite hitter during his time at Auburn. His persona has taken a life of its own, and he's even signed a deal with Barstool Sports, which is selling DiChiara merchandise with the nickname "Thicc King."

Sonny DiChiara is putting Auburn baseball on his back this season. Fans can't get enough of him, from his walk-up music to his towering homers. No matter how the Tigers finish this season, he'll always be a legend at Auburn University for this season. Maybe it's time to start talking about a statue.