I often reminisce about my childhood when thinking about championship moments. I, and I assume every kid, envisioned being the hero when shooting hoops in the driveway or playing wiffleball in the backyard. For the latter, the scenario was always the same: bottom of the ninth, bases loaded, full count, two outs. It was do-or-die unless it was a bad pitch or there was a dog barking in the background, of course. Then we deferred to the league offices in New York, and they insisted we do the play over. A walk-off grand slam was almost always the outcome, and boy, did the Fla-Vor-Ice hit sweeter in the postgame celebration.

I have lived this thousands of times but never had the privilege of experiencing a walk-off in a real game.

Back in 2010, when Merrifield was a right fielder for the South Carolina Gamecocks, he was at the plate in the bottom of the 11th inning in Game 2 of the College World Series Finals against UCLA, a team that had both Gerrit Cole and Trevor Bauer on their roster. With a runner at third, the score tied at one and one out, Merrifield had the opportunity to live out what so many kids dream about in the backyard.

Merrifield shouldn't have had the chance to win the game for South Carolina. First and second base were open, yet UCLA chose to pitch to him. The broadcasters even made note of this decision. Keep in mind, too, that Merrifield was the No. 2 hitter in the lineup and had a .321 average. He wasn't a slouch, but I guess the Bruins liked their chances with him better than Jackie Bradley Jr., who was electric in Omaha that year.

So, UCLA elected to bring in the infield. That didn't matter, though. Merrifield looked calm, cool, and collected while UCLA pitcher Dan Klein struggled to find the strike zone. All Merrifield had to do was wait for his pitch after working the count to 2-0. He caught a sinker down the middle and drove it to right field for the game-winning, RBI single, bringing in teammate Scott Wingo.

South Carolina 2, UCLA 1. The Gamecocks were the national champions of college baseball.

Merrifield's carried the momentum from his walk-off into Major League Baseball, where the two-time All-Star has carved out a nice career with the Kansas City Royals. The only way I see him topping this moment is if he hits a walk-off to win the big boy World Series.

Merrifield's Walk-Off was a Proper Sendoff to Rosenblatt Stadium 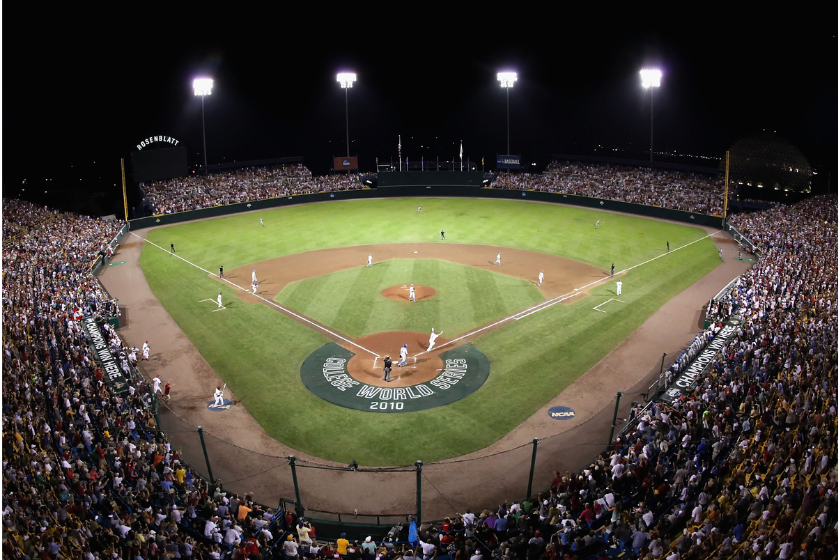 Merrifield's walk-off hit wasn't just iconic for winning a national championship. It was iconic because it was the last College World Series play ever at Omaha's Rosenblatt Stadium, the CWS' home from 1950 to 2010.

You wanna talk about a ballpark with soul, look no further than Rosenblatt. The old multi-colored seats, Henry Doorly Zoo's Desert Dome in the background of right fied, fans booing when the ballgirl would drop a foul ball from the net behind home plate. To me, it felt like a lesser version of Wrigley Field in Chicago because even though it was old, you could feel the history inside. America's pastime feels more alive when it's actually played in the stadiums where the game flouished.

Now, the College World Series is played at Charles Schwab Field downtown. Don't get me wrong, it's nice and all, but the authenticity of Rosenblatt, like seeing old peanuts melted into the ground beneath your seat, is something I'll always cherish.

I grew up going to games at Rosenblatt watching the likes of LSU, Texas, Florida, Georgia, Arizona, Nebraska, Arkansas, TCU and Miami, so it'll always be a special place to me. I was lucky enough to be in attendance for Merrifield's last at-bat, too. It was a fitting childhood ending to a cherished childhood place.