Bill Self absolutely loses his mind after bad blown call 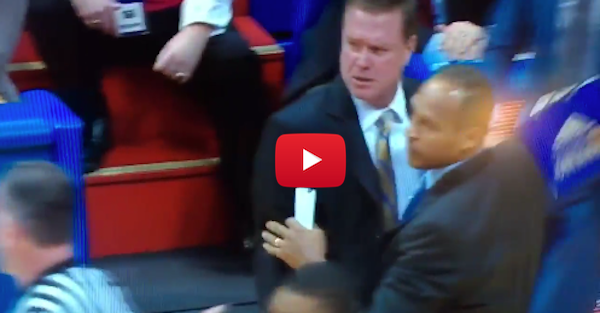 No. 1 Kansas and No. 2 Oklahoma were in a tight game in Kansas and there were some whistles blown that the refs are probably regretting even the day after. This one was particularly egregious as Frank Mason seemingly stripped Buddy Hield cleanly on his shot, but was called for the foul.

Kansas coach Bill Self was right next to the official who made the call and he was livid to say the least.

Youll never see Bill Self get more heated than this. Horribly blown call. 44-40 OU at the half. #kubball pic.twitter.com/YIZN5Id6DY

And a closer look at the rage machine that is Bill Self.

Let’s not forget that he broke a watch earlier this season because he got so mad. Self may benefit from a couple of anger management sessions, or maybe the refs just doing a better job. Either one would probably work.