FanBuzz college football Top 25: We have a new No. 1 team 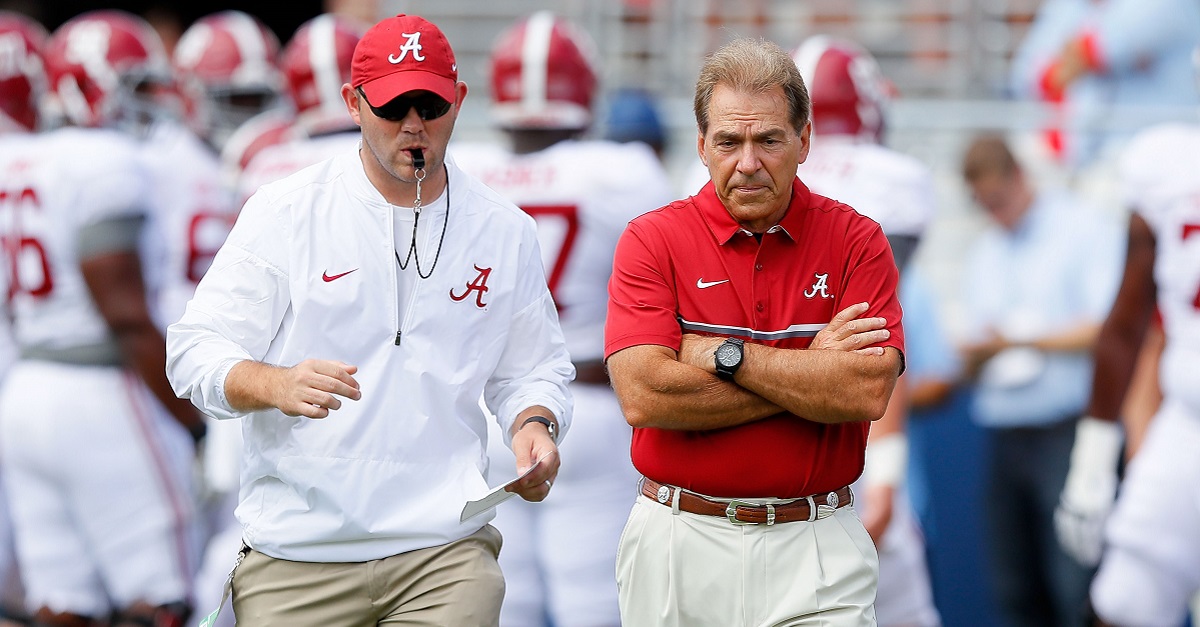 Week 3 is sure to go down as one of the craziest weeks of the 2016 season. Eight of our Top 25 teams lost, including No. 2 Florida State getting drubbed 63-20 by Louisville. Joining them: Oklahoma, Ole Miss, Oregon, Pitt, Iowa, Texas, and Notre Dame.

The crazy thing after that is all of the ranked teams that struggled and didn’t lose. Wisconsin, Tennessee, LSU, and Georgia all had problems, making this one of the hardest weeks to put together a Top 25. However, I did my best and here is what FanBuzz has following Week 3.

Yes, Louisville is our new No. 1 team. We know Florida State is still a really good team, and the Cardinals just demolished them in epic fashion. Quarterback Lamar Jackson looks like the greatest player in the universe, and even Louisville’s defense is starting to show its teeth. They just look fantastic right now and they are really fun to watch.

I’m not sure what was more impressive: Alabama coming back from 24-3, or Ole Miss scoring twice in about 20 seconds to make it a game again in the fourth quarter. Either way, the Crimson Tide pick up a big road win — and for once — Nick Saban was happy with his team this season.

So either Ohio State is really good, or the Sooners are terrible. I’m a little bit more inclined to believe it is the former in this case. The young Buckeye defense controlled most of this game, as Ohio State now takes control of a Playoff spot with the win.

This game was a lot closer than the score would indicate. Houston picked up the needed win on the road, but the Bearcats stuck around until Houston was finally about to pull away in the fourth quarter. This was probably Houston’s biggest test until they get Louisville in a Week 12 showdown.

Even if it was against South Carolina State, Clemson finally looked right on Saturday. Heck, they even had the game shortened because they were winning by so much; those are the Tigers we were expecting this year.

Neither of Stanford’s two wins this year have been mind-blowing, but they have gotten the job done. Christian McCaffrey had a big game on Saturday against the Trojans, which is really what he needed heading into a big game at UCLA next week. Things don’t slow down after that, either, as Stanford has a potential Top 10 matchup with Washington looming a week later.

The final score wasn’t as impressive as Michigan State’s 36-7 start in this game, but damn, the Spartans really do know how to make a statement in the middle of a season. They will have to keep it up, though, as they get Wisconsin in East Lansing on Saturday.

Big Blue moves down two spots, which isn’t really their own fault; Louisville and Michigan State just looked more impressive against more impressive opponents. Thankfully, Michigan’s cupcake-like schedule ends next week, and we will get a better idea if they are the real deal or not against Penn State.

Out of all the top teams, Washington has had by far the weakest schedule of them all. That may sound bad at first, but at least they Huskies can hang their hats on one thing: they have actually looked good in all of their games. Washington maintains their spot in the ranks by virtue of not struggling with clearly inferior opponents.

I’m probably going to get laughed at for this one, but who is left after the first nine teams?? Six teams of the 18 teams ahead of them last week lost, and a win at Auburn is a little more valuable than struggling with Georgia State, Nicholls, or Ohio.

I’ve used the phrase “process of elimination” a lot when using this rankings, but this might be the biggest example of that yet. A lot of teams had a chance to move up in the rankings, and a lot of them blew it with poor performances.

The Bulldogs move up a few spots even though they needed five turnovers to beat Missouri. What a week in college football, ladies and gentlemen!

You could argue that, in the long run, this was a game that Georgia needed. Their run game struggled, and when the game was in the balance, freshman Jacob Eason was able to deliver in a hostile road environment. The Dawgs go to Ole Miss next weekend, so this was potentially a great warm up for what is likely to be a very pissed off Rebels team.

Corey Clement was out, so it makes some since that Wisconsin would struggle… but it’s Georgia State. The Panthers aren’t completely terrible, but Wisconsin shouldn’t need a touchdown drive and then two defensive stops to beat a Sun Belt opponent.

They may have been gifted a win by Mark Helfrich, but a win over a ranked opponent is certainly impressive. Nebraska could now easily start the season 7-0, which would lead them into consecutive big matchups on the road: at Wisconsin and at Ohio State. Talk about trial by fire when they get to that part of the schedule.

After the big win over Virginia Tech at Bristol, I was starting to think that maybe just every team was just going to have a struggle game against a weak opponent like Tennessee did against App. State to open the season. Now, that’s actually not wrong, as tons of teams have had those struggle games, but Tennessee has now had two.

If the rankings weren’t weird before now, here is where they will definitely get there.

It’s hard to rank the Seminoles after such a huge loss, but here is what we do know about them: we know they still have tons of talent, and that they have a pretty impressive win over Ole Miss on their resume. Louisville winning by such a large margin was more indicative of how good the Cardinals are, and not that Florida State is bad. Florida State stays in the Top 15 unless their future games start to disprove that last point.

I’ve criticized Baylor for their weak non-conference schedule before, but I can’t deny that it has really worked out for them so far. While everyone else in their conference is falling, they are sitting pretty at 3-0. That’s actually pretty important considering they are the only 3-0 team in the Big 12 right now.

You have to give some respect to the Bison this week. The five-time defending FCS champs went into Iowa and claimed their sixth straight win over FBS opponents. The crazy part about that? North Dakota State has collected over $2.5 million in payments over that span from those FBS teams, meaning they are just getting paid like cupcakes, but performing like champs. What a country!

After a big win in OT over TCU last week, the Hogs cruised neatly in a win over Texas State. They will get a chance at a trifecta of Texas wins, as they get A&M on Saturday in a battle of ranked teams. Who would of thought that Arkansas vs. A&M in Week 4 would be one of college football’s best ranked matchups?

They got the win, but losing quarterback Luke Del Rio to a knee injury could be huge. Del Rio could be out for Florida’s big game against Tennessee this week, and if that’s the case… things don’t look great for the Florida offense.

On the bright side, Tennessee has struggled to score on App. State and Ohio, so I’m pretty sure the Gators defense is more than capable of keeping them in the game.

Going to Boone, NC and beating App. State like a drum is actually more impressive than it sounds. Props to the Hurricanes for taking the road game, and bigger props for winning it easily.

The bad news for Miami is quarterback Brad Kaaya tweaked his knee in the victory. Luckily for the Canes, they will get a week off before their next game, which is at Georgia Tech.

I’m… I’m not really joking. Western Illinois has now won at Northwestern and at Illinois this season, and they beat the Illini in pretty impressive fashion on Saturday. The Broncos have a very real chance at going undefeated this season.

With how vulnerable Georgia has looked the past two weeks, the Tar Heels are going to be kicking themselves about that one for a while. They still have some chances to prove their worth, as they have Pitt, Florida State, Virginia Tech, and Miami coming up on the schedule in consecutive weeks.

So Danny Etling looked alright on Saturday, and Leonard Fournette definitely looked like his old self. Those are all good things.

Running back Donnel Pumphrey is probably the best player you haven’t gotten a chance to watch yet. Pumphrey has 599 yards through three games, and he’s already broken Marshall Faulk’s school record for career rushing yards. They already have a win over Cal this season, and their schedule is pretty light going forward; they could go undefeated.

Oregon looked decent at Nebraska besides they confounding decision to go for two after every touchdown. SPOILER ALERT: didn’t work. Quarterback Dakota Prukop and running back Royce Freeman still look very good, though, and I think this is a loss they will be able to brush aside.