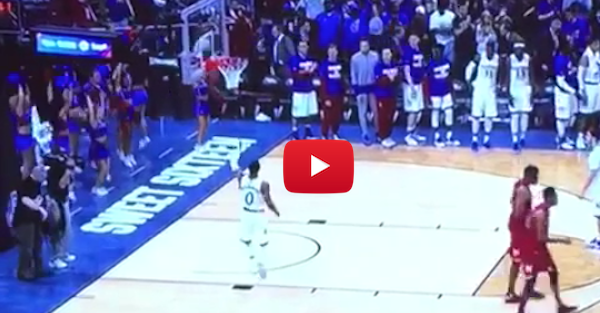 Kansas handily beat Maryland Thursday night in the Sweet 16 with a score of 79-63. Point guard Frank Mason had 11 points with two of them coming on kind of a classless move. With time winding down in the game and the Terps having given up, Mason took one last layup for good measure.

Naturally, the reaction on Twitter was a bunch of people getting upset over a guy padding his stats a little.

What on earth was Frank Mason doing

OK, KU. I was with you until Frank Mason scored with 0.1 left. Poor form. Poor sportsmanship.

But Frank Mason Jr. Just scored for no reason as Kansas clearly has the win and Bill Self does not react one bit…hmmm. #reasonsihateKU

Lol Frank Mason with the unintentional extra basket at the end of this KU game. And the refs spending time actually seeing if it counts.

Wow … I cannot BELIEVE Frank Mason did that. lol. Why didn't they count that basket? Wasn't even close to being after the horn.

Would love to see some Frank Mason bad karma on Saturday

Bill Self has addressed his players doing something like this before and even said it was kind of a “d**k move” in the past.