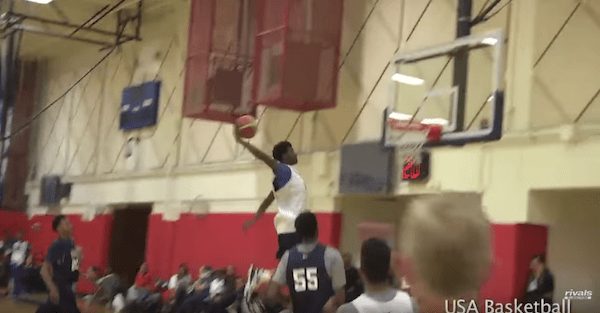 Josh Jackson had three schools holding their breath with his commitment hanging in the air this long — Michigan State, Arizona and Kansas were waiting to hear from him. It seems he’s made his decision and he has made one Bill Self an incredibly happy man.

Next year I will be attending Kansas University 💙❤️ #RCJH pic.twitter.com/rmBiF85n4J

Kansas only has three commits for the class of 2017 right now, but Jackson is considered the top recruit in the class and so that moves the Jayhawks up to the No. 7 class in the rankings after being ranked 41st before Monday. Jackson joins Mitch Lightfoot and Udoka Azubuike in KU’s class and became the second top recruit for Self in the last four years — Andrew Wiggins was the other in 2013.

Jackson shouldn’t have a problem breaking the starting rotation and is expected to be the best player on the roster next season regardless of position. A lot of KU’s talent left like Perry Ellis (graduation), Wayne Selden (draft entry), Brannen Greene (draft entry), Jamari Traylor (graduation) and Hunter Mickelson (graduation). So expect a lot of Josh Jackson highlights next season.