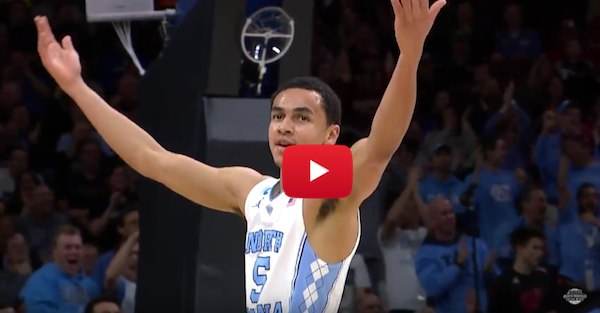 No. 1 seed UNC dispatched No. 4 seed Indiana with relative ease as they eclipsed triple digits in a 101-86 win to move on to the Elite Eight. The Tar Heels will face Notre Dame again on Sunday in a rematch from an earlier game this season that saw the Fighting Irish get destroyed in the ACC Tournament.

In the game against Indiana, five different players scored in double figures led by Marcus Paige’s 21 points. He not only was the high scorer for the team, but made some history as well in the outburst.

Marcus Paige: His 6 3PM tie Shammond Williams for the most in an NCAA tournament game in North Carolina history pic.twitter.com/86AgBeMMBR

That’s pretty good company to be in I would say. Joel Berry chipped in 14 points and five assists, Justin Jackson also had 14 points to go with five rebounds and three assists. Kennedy Meeks had 15 points and nine rebounds and Brice Johnson tied Billy Cunningham for most double-doubles in a season for UNC with a 20-10 game coupled with three blocks. It was his 22nd double-double of the season.