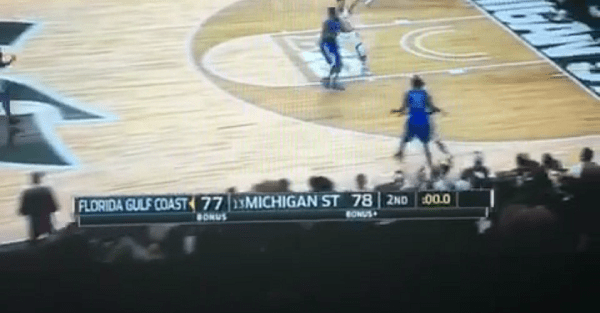 Michigan State barely survived an upset bid by Florida Gulf Coast at home with a 77-77 score. However, the Spartans got some help from a breakdown in the clock operating. With 1.6 seconds left on the clock, FGCU had time to throw the ball down court and throw up a shot, but the clock went off too early.

Hey @Michigan_State you should give your clock operator a raise. He deserves one after starting that clock just a bit early. pic.twitter.com/Qdj9799mqf

While that might look like an issue with the clock operator, apparently it could have been a reffing mistake.

Been told by source close to Florida Gulf Coast that ref at Michigan State game said he never hit start button on his belt. Brutal if true.

My bad on blaming the clock operator at Michigan State — if in fact, it was a referee mistake. We’ll wait to hear from Big Ten.

Surely FGCU would like a ruling on that and the play should have clearly been replayed and that could have easily been remedied with a review of the play and the decision to do it again.