Week 4 of the College Football season certainly didn't disappoint, and we went 5-3 in the college football betting market, which makes for an even better day all around. In Week 5, we get into some key conference games and a lot more college football action, with some solid betting odds.

Seriously, what's better than a parlay of Penn State's points, Minnesota's moneyline, Oregon State's over/under, and a Wisconsin W in their matchup against Illinois? If you find out, let me know. 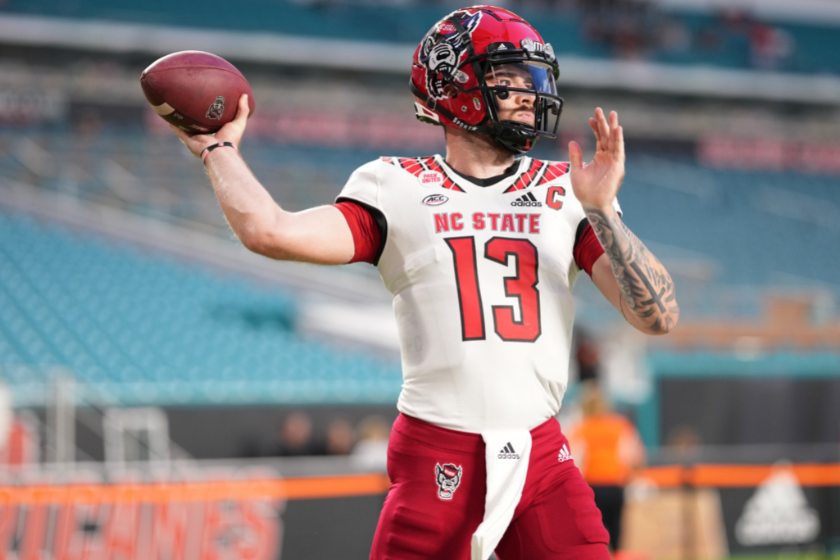 Clemson, who is trying to get back into the college football playoff picture, gets another college football grind, one week after beating Wake Forest in a double-overtime thriller. Will last week's game take a toll on the Tigers when Devin Leary and the NC State Wolfpack come to Clemson? Devin Leary was ranked as one of the top college football quarterbacks coming into the season, but a top 10 defense has also emerged for NC State. Leary had a four touchdown day to give the Wolfpack the win over Clemson a year ago. Clemson's secondary should be what Leary and NC State target extensively on Saturday. Louisiana Tech put up 300 yards passing, and Sam Hartman a week ago threw for 337 yards and six touchdowns. Certainly a cause for concern with Devin Leary coming to town.

Clemson's pass rush will get extensive pressure on Leary, and it might only have to stifle the run game. Clemson's secondary might get a break if Hurricane Ian creates sloppy conditions and keeps the offense grounded. You can tell with the 43-point total that the sportsbooks are not expecting an offensive showdown. Under normal circumstances, this total should be well over 60.

Grab the over while it's this low, if the weather breaks and the storm passes and these two quarterbacks can throw this total should soar over 43 with ease. The sportsbooks are banking on Hurricane Ian bringing the rain. But as of now rainfall and wind look manageable for Saturday evening in Clemson. It's something to monitor. If the weather is bad the game will get grounded and you should grab the plus point spread on the NC State. These teams both rank in the top 20 in terms of rushing defense. I'd look for a close game if rains soak Memorial Stadium and the winds gust. For now, the best bet is the total, and hope the game doesn't become too waterlogged. 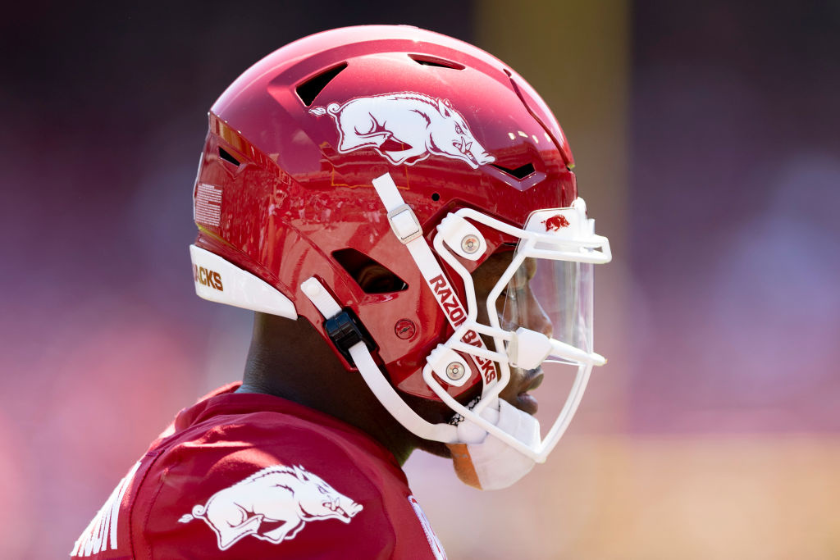 A classic college football showdown kicks off on CBS this Saturday as No. 2 Alabama invades Fayetteville. Arkansas is looking to avoid their second straight loss that would most likely take them out of the Top 25. Meanwhile, the Tide have won 22-of-30 vs the Hogs, including 15 straight. Arkansas' skilled offensive line comes up against a difficult defensive front seven that they will have to contain if they hope to spring KJ Jefferson who rushed for 104 yards and threw for 171 in the loss last week vs Texas A&M, the second victim of the Aggie's turn around after Miami. Arkansas has a very good run game which could excel and surprise some Alabama fans on Saturday.

The Crimson Tide, on the other hand, are putting up 48.3 points per game and the defense is limiting opponents to 7.3 points, good enough for third all of college football, so the battle for Arkansas will be difficult. Bryce Young will have to find his receivers downfield. Alabama beat up on Louisiana-Monroe and Vanderbilt, but they struggled downfield against Texas with no receiver going over 100 yards. Alabama will have to attack Arkansas through the air or risk the Razorbacks keeping it close. However if Alabama can come away with a convincing win against a ranked Arkansas team, that might take some first place votes away from Georgia.

Arkansas was set to go up 21-7 over Texas A&M on the road last week when KJ Jefferson fumbled near the goal line and the Aggies returned it 97 yards for the touchdown. That 14-point swing changed the entirety of the game. Had the Razorbacks won, they would have been well positioned inside the top 10. So their No. 20 ranking right now is due in large part, if not entirely, on the results of one play.

Strength vs strength, Alabama is clearly the stronger team, but Arkansas can put up yards on the ground and KJ Jefferson is every bit the duel threat quarterback. Alabama looked shaky on the road in Texas, and 17.5 is a lot to give up. The sportsbooks are offering up +100 odds on the Alabama point spread, signaling to me, Vegas is trying to entice you to take the Alabama spread. I think I'll do the opposite and take the points on the home....hog, see what I did there? Taking the big point spread on Arkansas will also cover us in the event of a field rushing upset. When in doubt bet against how you thing Vegas wants you too. 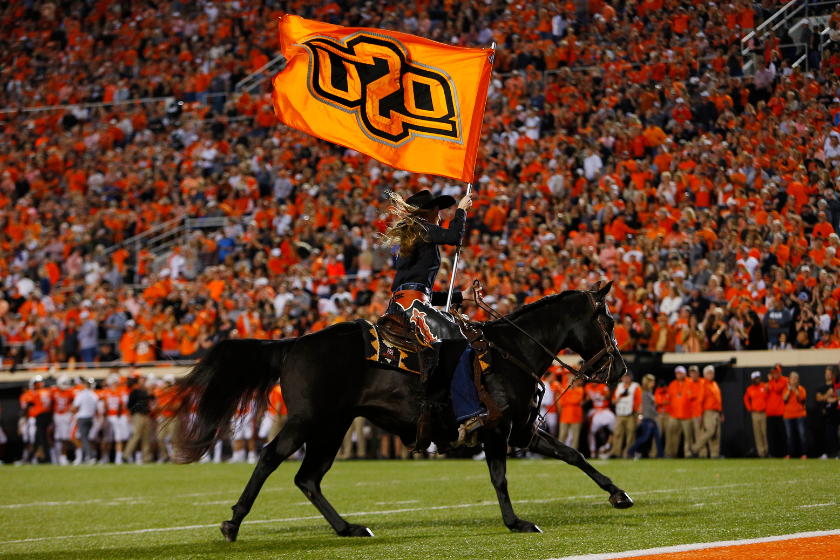 A rematch of the 2021 College Football Big 12 Championship game is a brilliant way to kick off October. You may recall last year, Baylor won the Big 12 championship by a literal inch. Stopping Oklahoma State just shy of the goal line late in the fourth quarter. Don't think Oklahoma State has forgotten that. The Cowboys also came into this with two weeks off and two weeks to prepare their revenge. Oklahoma State needs Spencer Sanders to get comfortable early and push the ball downfield. A few strong drives should set the tone. This will be the Cowboys first real test of the season. They've beaten up on Central Michigan, Arizona State, and Arkansas-Pine Bluff but have not seen anything like the Baylor Bears defense. The ground game has to be on point so that the field opens up for Sanders to throw. He has 916 yards and 10 touchdowns to just one interception this season. Sanders has the Cowboys at 9th in passing yards per game.

The Defensive front seven for the Bears does not mess around. Baylor ranks 7th in opponent rush yards per game and should be able to generate significant pressure on Sanders. Blake Shapen is completing 69% of his passes this season and is coming off a 238 yards three touchdown performance in a tight win over Iowa State on the road. If he can avoid the Oklahoma State pass rush off the edge and get the ball out quickly, that might be the key to this game.

I was high on both of these teams as potential playoff crashers this year. Baylor had an early setback with the road loss to BYU, but is slowly climbing back up the rankings. A win against Oklahoma State should bump them back into the top 10. Oklahoma State is 11th in the nation in total offense and seventh in points per game. But they have yet to face a team like Baylor. Baylor comes into this game battle-tested, having already played BYU and Iowa State. If this game comes down to defense, Baylor has a significant edge. Having played no offensive powerhouses, Oklahoma State's pass defense is giving up an average of 323.5 yards per game. That ranks 122nd in the nation. We are getting the Bears at -2.5 at home, which is under the key number of three. This feels like one of the best college football odds of the day. Take the Bears and the manageable point spread. 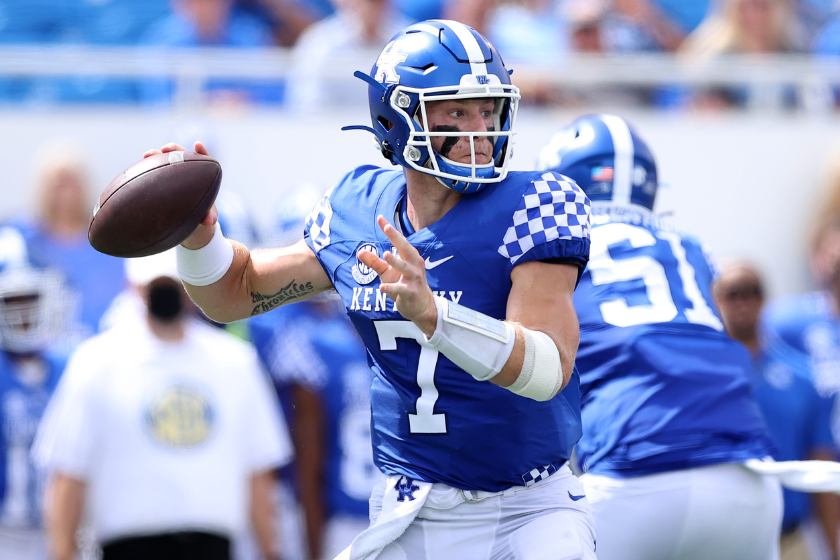 Saturday will be the first time that Kentucky and Ole Miss meet as ranked teams in more than 60 years. Two undefeated college football teams clash in a sold-out Vaught-Hemingway Stadium in Oxford in this most recent installment of a classic rivalry. Both teams are coming off uninspiring wins. Kentucky looked flat in their victory over Northern Illinois, while Ole Miss survived a second-half scare when they couldn't put up any second-half points vs Tulsa.

The Ole Miss ground attack has been one of the most dominant in the country. They rank second in rushing yards per game and eighth in rushing play percentage in all of college football. Quinshon Judkins and Zach Evans have combined for 794 yards and 9 touchdowns this season, while quarterback Jaxson Dart has added 201 yards on the ground. However, Dart only averages 174.3 passing yards per game, which might allow Kentucky to focus on stopping the run and make Dart beat them through the air.

Quarterback Will Levis has fared better in the passing game than Dart. Levis has already thrown for 1185 yards and 10 touchdowns to four interceptions. He will face pressure from the Ole Miss pass rush. Kentucky's offensive line will need to step up after allowing five sacks to Northern Illinois a week ago. This could be problematic with the Ole Miss defense ranking fifth in sacks per game.

The Ole Miss ground attack is going to be too much for Kentucky to contain all game. They also have a leg up in the pass rush department. A lot of people are on the Kentucky point spread which is giving contrarian value to Ole Miss under the key number of seven. Lay the chalk with the home team. 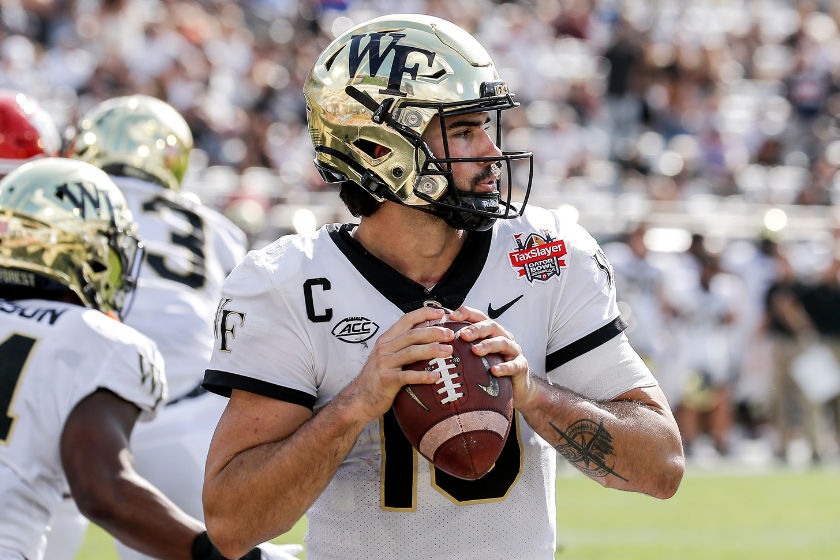 Wake Forest almost took down No. 5 ranked Clemson last week in a double-overtime thriller. Now they get another ACC foe in undefeated Florida State. Florida State has been impressive so far in the short season, but has played two close games vs LSU and Louisville. Florida State leads the overall series 30-8-1, but Wake has won the last two. The Seminoles have one of the best passing defenses in the ACC, which is good because Wake Forest is the number one passing offense in the ACC.

Wake Forest quarterback Sam Hartman is as advertised and is now definitely on a few more NFL scouts raiders after he threw for 337 yards and 5 touchdowns in the face of Clemson's elite pass rush last week. He is picking up right where he left off last season when he guided the Demon Deacons to the ACC Championship game. Wake Forest is 17th in passing yards per game, which leads the ACC. Can Hartman have another game like last week, or will the Florida State secondary shut him down?

We talked about the Florida State defense above but let's not count out the offense which is putting up 34.3 points per game to Wake Forest's 42.3 both these offenses can score so the over which is set at 64 is definitely in play here. But what I found shocking was the line which is giving us +6.5 on Wake Forest, a team who a week ago almost upset Clemson. Hartman is looking like one of the best quarterback options in next year's NFL draft after CJ Stroud and Bryce Young the betting line here is a true head-scratcher. The sportsbooks are really big on a large Florida State point spread. Take the points on the Deacons in a game they most likely can win outright. Look to sprinkle a little on the Wake Forest moneyline at +200 as well.