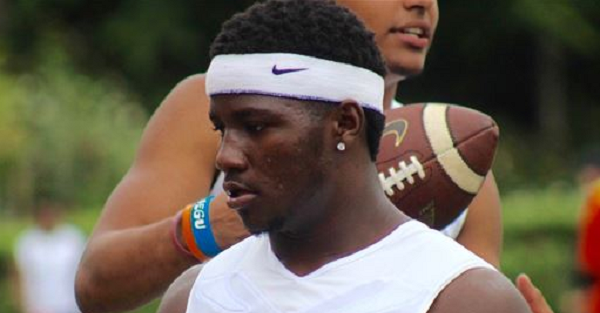 The Ohio State Buckeyes have a stellar 2017 recruiting class set to enroll but Urban Meyer will be without one of his more high-profile initial commitments. Four-star wide receiver Tyjon Lindsey, who committed as part of a unique video alongside fellow stud WR prospect Trevon Grimes, announced early on Tuesday morning that he will be re-opening his search for the next step.

I will like to announce that I have OFFICIALLY opened my recruiting process back up.

Lindsey, who stands at 5-foot-9 and 161 pounds, is a top-40 prospect nationally and the No. 1 prospect from the state of Nevada, per 247Sports. The talented wide receiver was committed to spend his college career in Columbus alongside his high school quarterback, Tate Martell, but Lindsey will apparently be going elsewhere for the next four years.

Lindsey was unable to play in the U.S. All-American Bowl due to a knee injury, and he was banged up throughout his senior season at Bishop Gorman High School. Still, this is a big loss for Ohio State, even in the midst of what is an otherwise stellar compilation of prospects. At this point, it is still unknown as to the major players for Lindsey’s next step, but Nebraska and Oregon have been rumored to be interested in recent days.

Urban Meyer and his staff will undoubtedly search for a “plan B” in the immediate future, but that choice probably won’t be as talented and dangerous as Tyjon Lindsey would have been in Columbus.