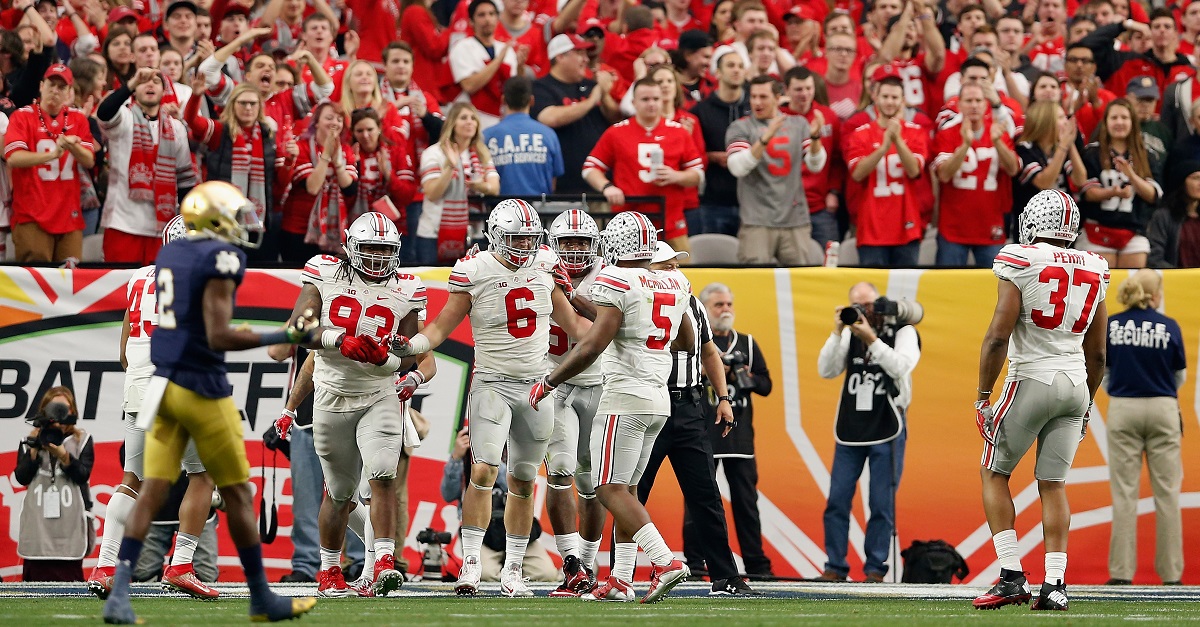 Getty Images
GLENDALE, AZ - JANUARY 01: Defensive end Sam Hubbard #6 of the Ohio State Buckeyes celebrates with Raekwon McMillan #5 after a sack on quarterback DeShone Kizer (not pictured) of the Notre Dame Fighting Irish during the fourth quarter of the BattleFrog Fiesta Bowl at University of Phoenix Stadium on January 1, 2016 in Glendale, Arizona. The Buckeyes defeated the Fighting Irish 44-28. (Photo by Christian Petersen/Getty Images)

Urban Meyer and the Ohio State Buckeyes will be forced to replace a great deal of talent as the 2016 season and approaches, but no loss is more significant than Joey Bosa. The superstar defensive end landed as the No. 3 overall selection in the 2016 NFL Draft, and Bosa was a consensus All-American for both the 2014 and 2015 seasons. In short, he was the best player on the field for a team with a laundry list of top-tier athletes, and replacing Bosa will be a significant task.

Steve Palazzolo of Pro Football Focus believes that Ohio State’s challenge in replacing Bosa will be mitigated by the presence of Sam Hubbard, though, as the sophomore lands on PFF’s list of top 25 breakout candidates across the country.

Replacing the nation’s top-graded defensive linemen (Joey Bosa) is no easy task, but Hubbard showed his potential on his 346 snaps as a redshirt freshman. He’s still young as a defensive lineman as he played safety in high school while dabbling at tight end and linebacker while redshirting in 2014. He picked up seven sacks, six QB hits, and nine hurries on only 186 rushes while holding his own in the run game.

The 6-foot-5, 265-pound Hubbard was named as a freshman All-American by USA Today in 2015, and he is a former four-star recruit from Archbishop Moeller in nearby Cincinnati. It should be pointed out that Hubbard will not be counted on to replace all of Bosa’s production (simply because that would be virtually impossible) but the talent is certainly there for an All-Big Ten campaign, even as a sophomore.

With players like Vonn Bell, Darron Lee and Eli Apple also in the NFL alongside Bosa, Meyer and his defensive staff will have their hands full in the 2016 season. Having Sam Hubbard helps, though, and the Buckeyes should be thankful.