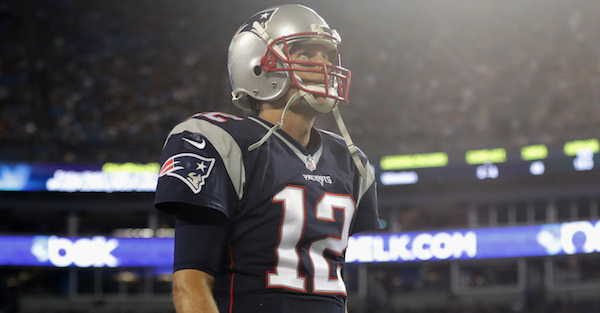 DeShone Kizer is one of the more polarizing prospects in the 2017 NFL Draft. No one doubts the overall physical package of the former Notre Dame quarterback but Kizer was wildly inconsistent during his final college season and the jury is out as to just how high he will go and where he stands among the quarterback class at large.

On Thursday, Kizer made real waves with a particular comment, though, and USA Today brings word of the extremely bold claim that he put forth.

“No one else can do what I can do and I’ve truly figured out in this [draft] process, if I can maximize all my potential in every aspect of the game — this is bold — I do have the ability to be the greatest quarterback to ever play.

“Imagine taking Brady’s intellect and Brady’s preparation and putting it on a guy with Cam Newton’s body. Why can’t I be the greatest? The only thing stopping me from is me. That’s what’s driving me now.”

For what it’s worth, Kizer quickly indicated that he was taken out of context.

Sheesh😳 Way out of context… but alright https://t.co/6zGztV08Bu

Still, the notion that Kizer sees himself as a mix of Cam Newton and Tom Brady is fairly outlandish, if only because both players have been MVP’s and one is headed to the Hall of Fame as soon as he is eligible. On the other hand, Kizer having real confidence is probably a good thing in the aggregate and NFL teams will enjoy that tidbit if they can remove the aggressive upside of the comment.