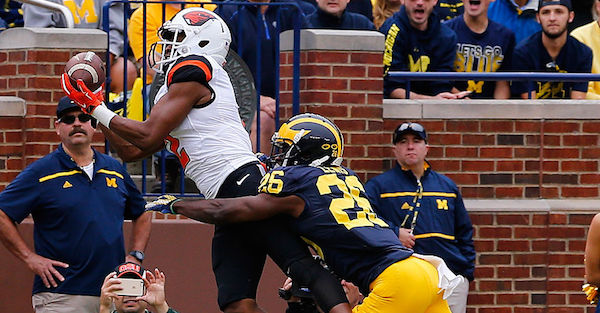 Oregon State wide receiver Hunter Jarmon has decided to skip his senior year with the Beavers to pursue a career in baseball.

Jarmon signed with the San Diego Padres as an undrafted free agent, and he announced his decision on his Instagram.

Oregon State receiver Hunter Jarmon is forgoing his final season of football eligibility to sign with the Padres as an undrafted free agent. https://t.co/ZuNFfmrE7I

Related: LSU reportedly has a pretty good reason for its controversial decision to block a potential transfer

Jarmon originally planned to play both sports at Oregon State, but he opted to only play football during his freshman season in Corvallis.

“I want to thank the San Diego Padres organization for allowing me to relive my baseball career again,” Jarmon said on his Instagram account, as noted by Oregon Live. “I appreciate the workouts the organization has put me through this last month, along with signing me. With that being said, I will forego my senior year of football at OSU. OSU has been a amazing experience for me, and I’m grateful for everything the university has given me. Big thanks to my teammates, coaches and the best fan base in the Pac-12.”

Oregon State football coach Gary Anderson released a statement saying he supports Jarmon’s decision, and he wished him the best in his pursuit of a baseball career.

Jarmon recorded 41 receptions for 555 yards and three touchdowns during his three years with the Beavers.