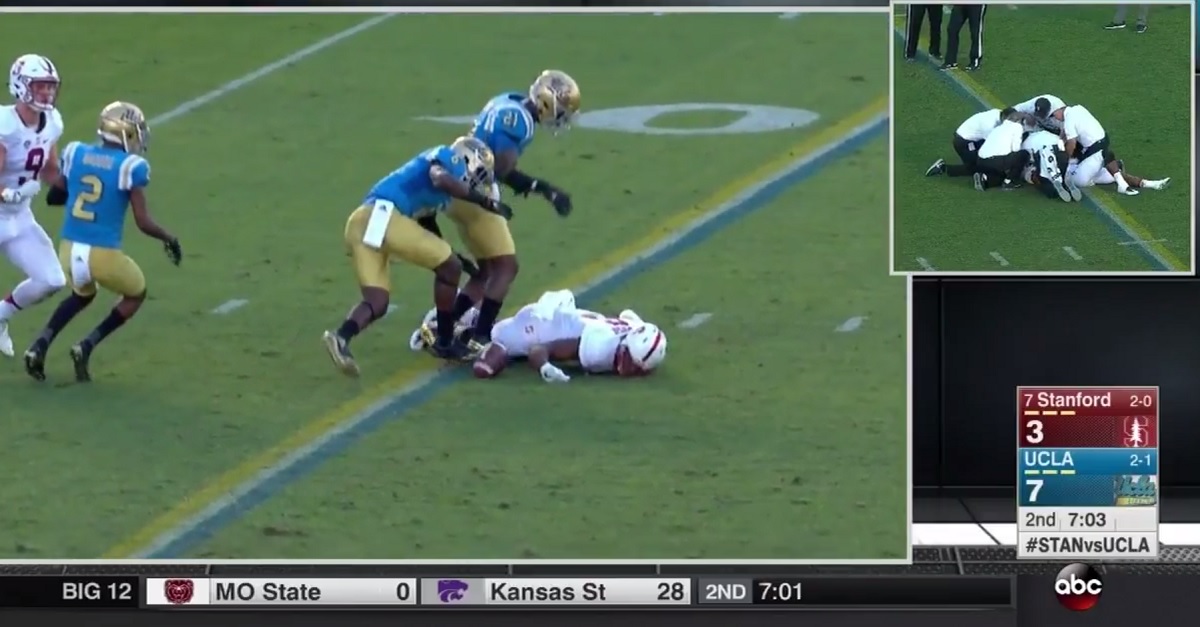 During Stanford’s game against UCLA this past Saturday, wide receiver Francis Owusu was forced to leave the game after a potentially dirty hit on Owusu left him knocked out on the field.

The hit drew criticism from fans and media alike. With the multitude of seemingly legal hits that are called targeting, how did this one slide by the wayside?

The Pac-12 has responded to criticism of the hit, coming to the defense of their officials by ruling that the hit was legal and that he play was called correctly.

“Our conference office review of the play involving the tackle by UCLA’s Tahaan Goodman of Stanford’s Francis Owusu during Saturday night’s game confirmed that the tackle was legal per NCAA playing rules. Per NCAA rules, the Stanford player was no longer a defenseless player once he caught the ball, established himself, and turned upfield. At that point the Stanford player became a ball carrier and was not deemed defenseless, which meant that NCAA Playing Rule 9-1-4 would not apply (hits to the head or neck area of a defenseless player). When analyzing NCAA Playing Rule 9-1-3, which states “No player shall target and make forcible contact against an opponent with the crown (top) of his helmet” it was determined that the crown of the helmet was not used. While there certainly was helmet to helmet contact, neither the game officials on the field or the replay officials called targeting because the contact was with the front of the helmet and not the crown (top) of the helmet.

Both parts of the statement are critical. Owusu was not a defenseless player, so the Pac-12 refs were right in simply not calling contact to the head area as targeting. However, the second part is interesting, because you could easily make the argument that the defensive player — UCLA’s Tahaan Goodman — comes in and uses the top of his helmet with the hit.

The last replay from the Twitter video above seems to show a lot of contact being made with the top of the helmet and not the front of it.

Maybe the rules need to be clarified on this, but from the video replays we have of this hit, it looks like Goodman lowered his helmet to make the hit, and Owusu was injured because of it. These are the kind of hits that the targeting rule is supposed to prevent, and in this case, it didn’t work.