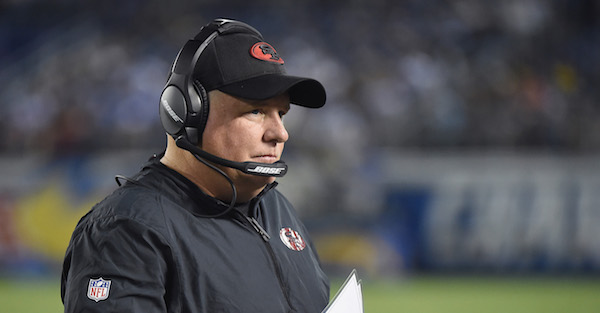 Chip Kelly’s foray into the world of the NFL did not go according to plan, as the former Oregon head coach failed to gain lasting traction with either the Philadelphia Eagles or San Francisco 49ers. However, Kelly is still widely respected at the college level and at least one writer believes he will return to his roots after spending the 2017 season in the TV booth at ESPN.

Ralph Russo of the Associated Press predicts that Kelly will actually be headed back to the Pac-12 to replace Jim Mora at UCLA.

The most-wanted coach on the market will end up at UCLA after another rough season by the Bruins convinces the administration to dip into all that new Under Armour money — this is the first of a 15-year deal worth $280 million — to part ways to Jim Mora. Former Oregon coach Chip Kelly will be biding his time at ESPN this season.

Mora’s tenure has cratered in recent years and he certainly appears to be on the hot seat as 2017 approaches. If UCLA succeeds with a healthy Josh Rosen this year, this scenario makes less sense but a program in Los Angeles might seriously look at an innovative (and popular) mind like Kelly for the future.

For now, this is only speculation but it wouldn’t be difficult to imagine a scenario in which Chip Kelly was operating at the college level again in only a few months.