Despite “QB of the future” already on their roster, contender has reportedly made an interesting promise to a recruit 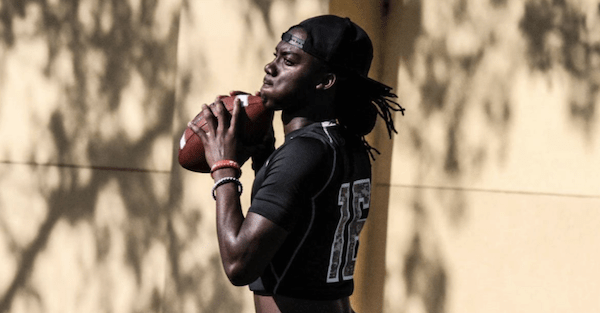 Jacob Eason is “the guy” for the Georgia Bulldogs and he just completed his true freshman campaign. The talented quarterback amassed 2,430 passing yards and 16 touchdowns (against eight interceptions) during an up and down debut campaign but, considering his five-star pedigree, it is widely assumed that Kirby Smart and company already have their “quarterback of the future”.

However, word broke this week that Smart and his staff are pursuing a five-star quarterback prospect that could change things considerably. Ohio State commit Emory Jones, who is a dual-threat prospect, spoke with Jake Reuse of Rivals and he revealed that Georgia engaged him in a conversation about tweaking their offense around his skill set.

“They’re changing their offense to me. It’d be more of a no huddle, and that’s what I like. They said they see how I run it in high school system, and they believe I could be successful playing at UGA.”

While Jones would not arrive until Eason played two full seasons in Athens, this is still noteworthy. In addition, Jones indicates that Smart “always wanted (Jones) to be his quarterback since he was at Bama” and this type of strong speech can be impactful on the recruiting trail.

Recruiting promises, or even suggestions, are made every day in this way so this could be much ado about nothing, but Jacob Eason can’t be thrilled to hear this type of information inferred to a potential competitor.