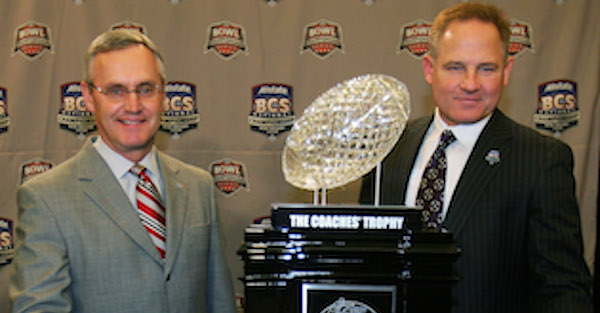 Former Ohio State head coach Jim Tressel is reportedly back in the prowl after serving his five-year show cause penalty.

According to Pittsburgh Sports Now, Tressel is interested in the vacant Pitt athletic director job.

“I?m told that (Jim) Tressel has reached out, possibly multiple times, to a member of a major search firm asking about Pitt and expressing his interest. Keep in mind, to this point, this has been a one way street (as far as I know). Pitt hasn?t spoken to or even begun the process of forming a list of candidates.”

The former Ohio State head coach, now 64, was hit with sanctions after an investigation into $14,000 in cash and tattoos exchanged for autographed jerseys, rings and other memorabilia.

Tressel resigned from his position as head coach and according to ESPN had four opportunities to reveal his knowledge.

Tressel coached the Buckeyes to six Big Ten titles and one national championship.