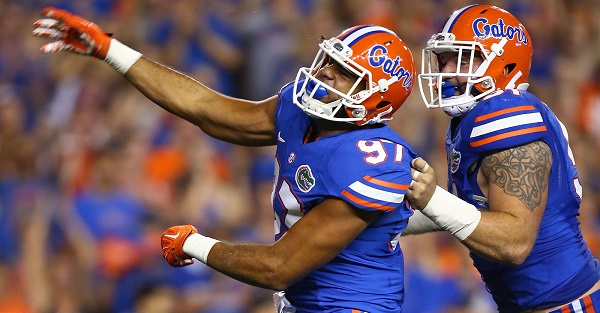 Rob Foldy/Getty Images
GAINESVILLE, FL - SEPTEMBER 05: Defensive lineman Justus Reed #97 of the Florida Gator reacts after making a sack against the New Mexico State Aggies during the second half of the game at Ben Hill Griffin Stadium on September 5, 2015 in Gainesville, Florida. (Photo by Rob Foldy/Getty Images)

The Florida Gators have excelled on defense in the recent past, especially amid struggles on the offensive side of the ball. However, Jim McElwain, Randy Shannon and company will be forced to move on without a member of their defensive line, as redshirt sophomore defensive end Justus Reed will be transferring from the school.

Reed’s note does not indicate a final destination, but it will be interesting to see where he lands. The 6’3″, 241-pound pass rusher did not manage to crack the starting lineup for the Gators during his time in Gainesville, though he was expected to be a part of the defensive end rotation in 2017.

In his Florida career, Reed appeared in 11 games, including nine during the 2015 season, and he reportedly battled injury issues at the start of his second season with the Gators. While this defection may not have far-reaching impact considering Florida’s relative depth as a unit, it is never ideal for a player to be on his way out in April and McElwain’s staff will be forced to adjust accordingly.

Justus Reed probably wasn’t going to be an impact player for Florida but he may have been a contributor next season. Now, he will not be.