Klatt: Alabama isn’t the “clear-cut” favorite for the national title 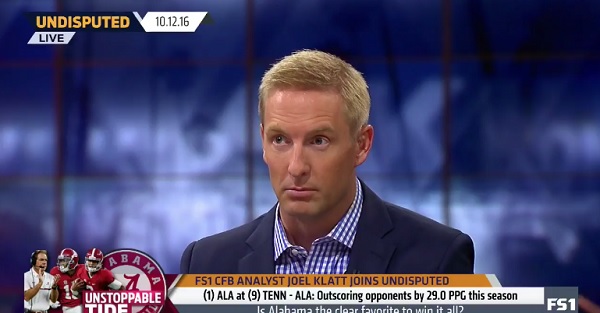 FS1’s Joel Klatt is impressed with Alabama. He thinks they deserve to be the No. 1 team, as in his eyes, to be the champ, you’ve got to beat the champ.

That being said, Klatt doesn’t believe that Alabama is the “clear-cut” favorite to win the College Football Playoff this season.

Is @AlabamaFTBL the clear favorite to win it all? @JoelKlatt​ joins Undisputed. pic.twitter.com/gxOy6CujJc

“It’s not clear-cut, because they have some holes right now. They’ve got some things — some warts, if you will — to clean up. One of them, namely, the pass defense, an area that Nick Saban is supposed to be the expert in, right? And he handles a lot of the secondary coaching, and right now, there’s been way to many missed assignments and blown coverages in the back end for Alabama.”

RELATED: Tennessee getting back top playmaker ahead of Alabama game

Klatt went on to specifically criticize Alabama for their performance against Arkansas. Klatt said that giving up 400 yards passing to Ole Miss was acceptable, but that doing it against Arkansas was unacceptable. That last criticism might be a little harsh, as Bret Bielema offenses have done well in the passing game the past two seasons.

But the biggest reason Klatt says that Alabama isn’t the clear-cut favorite is thanks to Ohio State. Klatt is extremely impressed with Ohio State after they beat Oklahoma earlier this year, and the young Buckeyes have been fantastic overall this season.