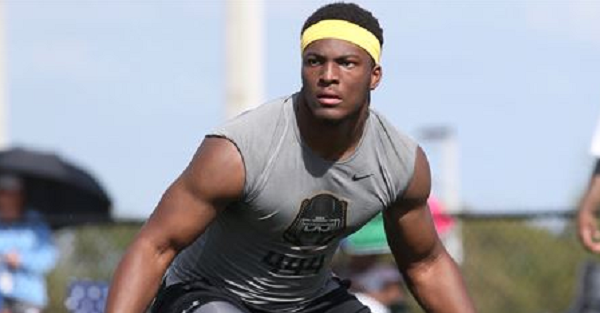 As many football prospects are preparing to simply enjoy the Christmas holiday, 2017 linebacker Jordan Anthony will be making an important decision. The five-star recruit from IMG Academy is set to announce his college commitment on Thursday evening and the finalists for his services form an impressive group.

For Everyone That Was Asking I Will Be Committing Tomorrow At 7 PM Via Video pic.twitter.com/GftoyqT1ND

At this point in time, Michigan appears to be the favorite to land the services of the 6-foot, 220-pound linebacker. 247Sports “Crystal Ball” projections are 100 percent in favor of the Wolverines and Jim Harbaugh’s recruiting prowess is well documented.

However, the other finalists are dangerous in their own right, including Oklahoma, Auburn, Maryland and reigning Big Ten champion Penn State. At this stage, Anthony is ranked five-stars by Rivals.com, and is their No. 1 inside linebacker for this recruiting class.

Jim Harbaugh has been an impressive closer on the recruiting trail since arriving back in Ann Arbor and, with that in mind, it would be a bit of a stunner if the Wolverines did not secure Jordan Anthony’s commitment. In the same breath, wild things happen on the recruiting trail all the time and five programs will be holding their breath on Thursday evening.