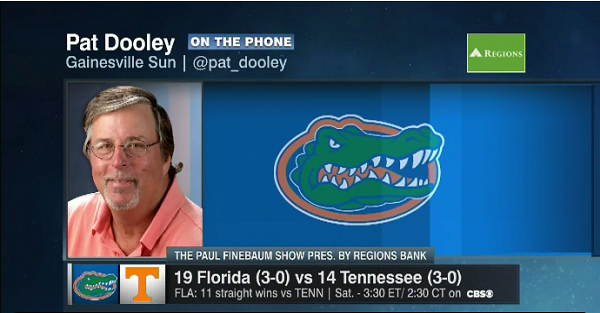 Pat Dooley has been covering Florida sports since he joined The Gainesville Sun in 1987 so he knows a good Florida or Tennessee football team when he sees it. He’s also been known to say how exactly how he feels about a team even if it’s the one he’s covering. He was on the Paul Finebaum show on Monday and he is not impressed with this year’s Volunteer squad.

The Vols are ranked No. 14 in the latest AP Poll and are a cool 3-0 heading into the game against Florida. The Gators are ranked No. 19 and are also 3-0, but have a conference game under their belt with a 45-7 win against Kentucky. The Vols’ wins over Virginia Tech, Appalachian State and Ohio don’t exactly impress Dooley though as he compared them to the Kardashians!

Now that’s just all kinds of shots fired from the Florida beat writer. But we’ll see who gets the last laugh on Saturday in front of a raucous 100,000 fans and College GameDay.