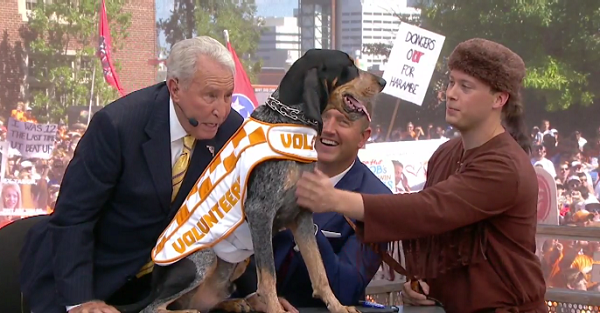 ESPN’s College GameDay was in Knoxville for the Tennessee-Florida game and at the end of the show he made his pick for the game. He isn’t one to be swayed by home crowds, but did like the Vols against Virginia Tech in Week 2 when the show was at the Battle at Bristol. He even brought up Smokey the Dog to the stage and did so again this week.

RELATED: Lee Corso gets his troll on with GameDay pick at Bristol

Naturally, everyone thought he would be going with Tennessee again, but he pulled a patented Corso juke move on his head gear and went with the Florida Gators:

I think Smokey was alright with it because he did not enjoy hanging out on that desk. At least that’s what it looked like to me.