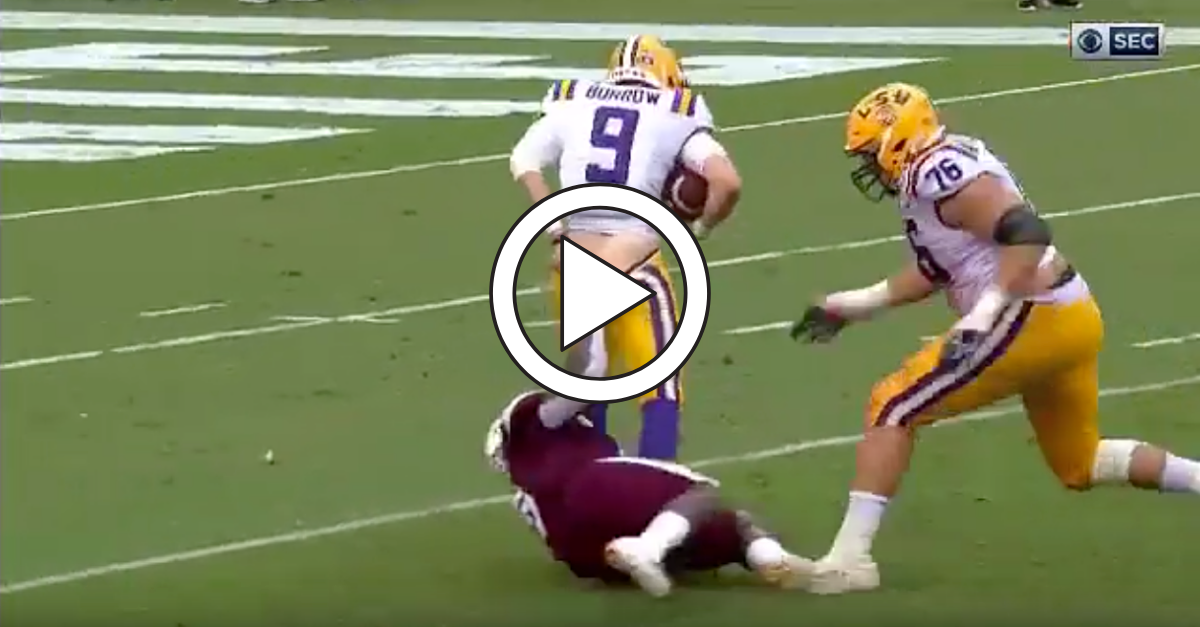 LSU Tigers quarterback Joe Burrow did things no one in Baton Rouge, Louisiana ever had before. Through the team’s first seven games, the pride of Athens High School had already broke LSU’s single-season record for touchdown passes (29) and went on to break the Southeastern Conference and FBS all-time record. Not only that, Burrow smashed LSU’s passing yardage record.

Burrow showcased several Heisman Trophy moments and won the award in a landslide before capturing the College Football Playoff National Championship over Clemson. There were so many pivotal moments during that 2019 season that it’s hard to pick just one.

I don’t think everyone seeing Joe Burrow’s white ass was exactly what the Heisman voters had in mind, though.

In the second half of LSU’s 36-13 victory over the Mississippi State Bulldogs, defensive end Chauncey Rivers chased down Burrow. From behind, with nothing but gold trousers to grab hold of, Rivers ripped Burrow’s pants down, introducing Starkville and the college football world to “Joey Buttcheeks.”

Not only did Burrow protect the football, he managed to keep his pants on (somewhat) while the college football world gazed upon his oddly-well-groomed ass in all its shining glory.

As you can imagine, social media had a field day with endless butt jokes.

Joe Burrow is playing his ass off pic.twitter.com/tLKLENTHtE

Joe Burrow’s ass during a game on national television pic.twitter.com/kBvbg2P0Ff

me opening twitter to see joe burrow’s ass all over my mf timeline pic.twitter.com/sCqVd157cL

Even more hilarious than Joe Burrow’s bare bottom flashing its face to a national CBS audience?

Burrow’s grandparents were at the game.

“I felt it coming out,” Burrow jokes afterwards. “I heard there was supposed to be a full moon tonight.”

"I heard there's supposed to be a full moon tonight here in Starkville." #LSU Joe Burrow on his pants getting yanked down. pic.twitter.com/HhpDbMmqta

At least LSU quarterback Joe Burrow had a sense of humor about it, and who wouldn’t when you’re playing like the former Ohio State backup was?

I’m sure Alabama Crimson Tide or Auburn Tigers fans would love making Burrow the butt of some more jokes, but one ass crack is plenty for me this season.

This article was originally published October 21, 2019. It was updated after the season was over.