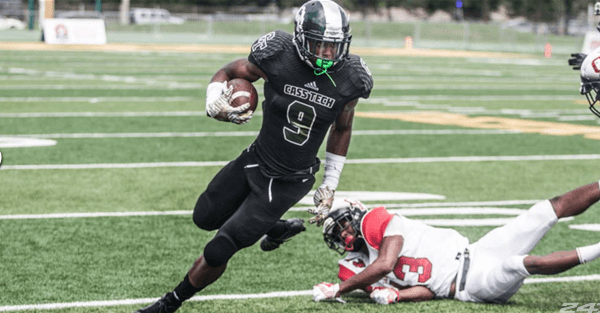 When we last heard from five-star 2017 wide receiver Donovan Peoples-Jones, he was visiting Ann Arbor to check out the Michigan Wolverines. Now, it appears that the top pass-catcher in this year’s recruiting class will be taking an official visit to a program quite “close” to Michigan and it wasn’t his original intent.

Change of Plans for this weekend ! pic.twitter.com/b6nfhRhZ0t

The 6-foot-2, 192-pound prospect from Detroit was originally scheduled to attend the battle between LSU and Florida, but due to weather issues, Peoples-Jones is bound for Ohio State and this can’t make anyone happy in Michigan. To be fair, the Wolverines are seen, at least by many, as the favorite to land the top-10 overall recruit, but having Peoples-Jones on campus in Columbus for an unexpected weekend has to send fear down the spine of Jim Harbaugh and company.

At this point, it is still early and everyone is recruiting Donovan Peoples-Jones for good reason. However, the weather concerns this weekend will affect more in the football word (and, obviously, the people who live in the afflicted areas) than simply on-field results, as the recruiting scene could be impacted greatly by what comes of this trip for the nation’s most impressive wide receiver prospect.

Battles between Jim Harbaugh and Urban Meyer are fun.