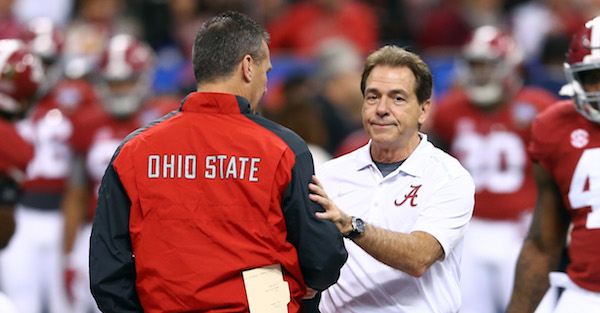 Just ahead of National Signing Day (Wednesday Feb. 1), USA Today Sports’ Paul Myerberg has ranked the 10 best college football recruiting classes of the past decade. And, aside from one, maybe two surprises, nothing could better illustrate how the rich in college football just keep getting richer.

Hardly a surprise that the Tide would occupy the top spot on the list — although the time frame might be. Nick Saban arrived in Tuscaloosa just one year earlier in 2007, but it didn’t take long for his big name to start attracting big-time recruits. That year he signed WR Julio Jones, DL Marcel Dareus, DT Terrence Cody, OL Barrett Jones, and RB Mark Ingram, among many others.

In his second season with the Buckeyes, head coach Urban Meyer signed one of  the most talent-rich recruiting classes college football, and certainly OSU, has ever seen. RB Ezekiel Elliott, QB J.T. Barrett, DE Joey Bosa and DB Eli Apple were among his signees. And the majority have gone on to make quite a splash at the next level.

Nick Saban followed up his stellar 2008 recruiting efforts with a class the following year that had almost as much star power. RB Eddie Lacy, RB Trent Richardson, QB A.J. McCaron, DB Dre Fitzpatrick and OT D.J. Fluker were just a few of the recruits that would add to Saban’s soon-to-be dynasty.

Jimbo Fisher’s third year at the helm in Tallahassee would mark the return of FSU to the national title conversation. QB Jameis Winston, DL Mario Edwards, RB Ronald Darby, DT Eddie Goldman and K Robert Aguayo all made certain that one of the best recruiting classes in the past decade would flourish by delivering a national championship the following season.

The Tigers are something of a mainstay as far as top recruiting classes, but in 2009 head coach Les Miles outdid himself. LB Barkevious Mingo, CB Morris Claiborne, LB Kevin Minter, WR Reuben Randle and DT Michael Brockers were the best of his signees that year, and they’d go on to help LSU win the national championship in 2011.

Head coach Chip Kelly ruled the PAC-12 for a short time and this recruiting class was a big reason why. RB LaMichael James, DE Dion Jordan, RB LaGarrette Blount, QB Darron Thomas, and LB Kiko Alonso were the headliners. They went on to an appearance in the BCS Championship game the following season.

Urban Meyer was in the middle of his BCS title run with the Gators when he landed a class consisting in part of OL brothers Michael and Maurkice Pouncey, TE Aaron Hernandez, DB Joe Haden, DE Carlos Dunlap, and DB Major Wright. And they’d all help Meyer win his second national title at Florida the next season.

While Stanford is without a doubt one of the country’s finest academic institutions, it’s not a typical landing spot for the country’s best high school football players. This group in 2009 had some four-star recruits, but as a whole many outplayed their rankings and laid the foundation for the Cardinal’s four consecutive 11-win seasons from 2010-2013.  LB Shayne Skov, TE Zach Ertz, RB Stepfan Taylor, LB Trent Murphy and RB Tyler Gaffney were the notables from the 2009 class.

This was the class that brought the Irish back to prominence after multiple years of futility. They would ultimately lead ND to a 12-0 regular season and national championship game appearance in 2012. LB Manti Te?o, OL Zack Martin, TE Tyler Eifert and RB Theo Riddick were the class’s headliners.