As a varsity high school baseball player, her dream was to become the first female MLB player. Her former softball coach told FanBuzz via text she could've played college baseball if she wanted to. However, when she took a trip to Auburn, a light went off.

"When she went to Auburn something clicked with her. She was surrounded by SEC athletes that could play," said Brittany Lewis, who was Bryant's head coach on the Mojo-Lewis travel team from 2017-20. "They moved like she did, they looked different, they played different. She realized her future was in this sport and she went all in."

Bryant moved from Albany, Georgia, to pursue a career in the SEC. She played sparingly as a freshman, but in 2022 she's been an instrumental everyday player for head coach Mickey Dean's Auburn Tigers.

It's early, but Denver Bryant could be shaping up to be one of the greats in Auburn softball history. 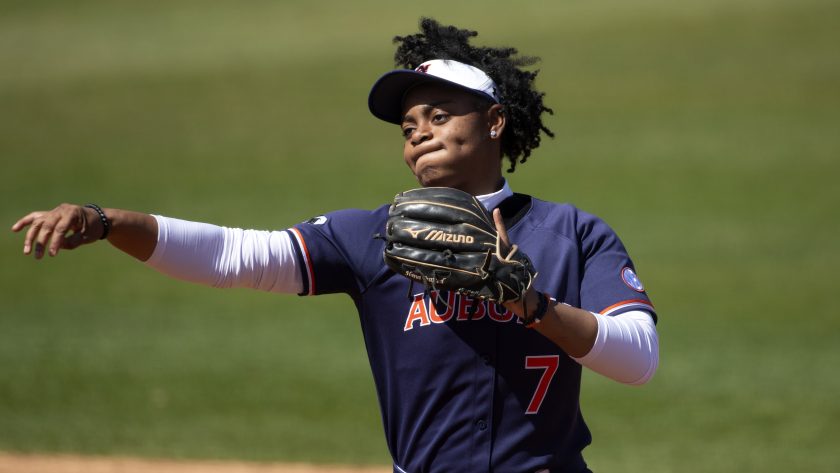 RELATED: Kasey Cooper is an Auburn Legend, But Where is She Now?

Through Auburn's first 38 games this season, Denver Bryant is undoubtedly one of its stars at the plate.

Behind an explosive swing and some ridiculous bat speed, she's hitting .371 with six home runs, four doubles and two triples. She's been clutch for Auburn, too.

On March 11, Bryant blasted a walk-off home run to beat Texas A&M in an eight-inning thriller:

SEC pitchers across the league aren't safe. Less than 10 days after that walk-off shot, she crushed a three-run home run against South Carolina that still hasn't come down. It was her celebration (and bat flip) that garnered her attention on social media:

Still waiting on this ball to land ?

Bryant has become a fan favorite at Jane B. Moore Field not only because she's a terrific athlete, but because she has a blast doing it. She's always hyping up her teammates and lighting up the diamond with her smile.

For as good as she is, it's hard to believe she picked up the sport later in life.

Last but certainly not least... We're rounding out our 2020 with another big addition!

? All-Region First Team
? Led Georgia's Class 4A with a .759 average
? Explosive athlete that began as a baseball standout

Her team was going up against Bryant's team. She was playing shortstop and made one of the more incredible plays she'd ever seen -- Bryant jumped about six feet off the ground to snag a live drive out of the air.

After the game, Lewis made it a point to talk to her and her mom. Her mom, Valerie, was pretty good athlete herself and a supportive mother despite staying busy with eight kids. Soon enough, Bryant joined Mojo-Lewis and continued to play baseball for the USA Women's National Team Development Program.

"Denver's love for baseball was very strong so we allowed her to do both," Lewis said.

She started her prep career as a varsity baseball player at Monroe High School and finished as a star basketball and softball player at Dougherty High School, where as a senior she hit .759, bashed 12 home runs and stole 35 bases. She was basically Dougherty's version of Barry Bonds.

Bryant has always had the natural ability to hit a ball, be it a baseball or a softball. But she needed help adjusting to a sport with bigger balls, smaller base paths and different pitch spins.

Lewis said she had to help her throw a softball with three fingers instead of two. She had to learn how to recognize different softball pitches. All of that still came so easy to her.

"Denver was leaps and bounds talent-wise above her peers in most cases," Lewis said. "She was just physically stronger and tougher from playing with boys and so that confidence and dominance took over on the softball field. She would easily steal bases, delay on pitchers, and even steal home if someone turned their head. She just took advantage of every miscue/deficit a girl had on the field."

When the recruitment process neared, Denver took her first major visit to NC State. The Wolfpack were going to let her play softball and continue playing USA Baseball.

However, Auburn found a way into her heart, and the rest is history.

Night in and night out, Lewis now gets to watch the young girl she coached blossom into an SEC star. She knows Auburn has something special there.

"I tell people all the time when they ask about her," Lewis said, "that I'll never coach another kid like that."