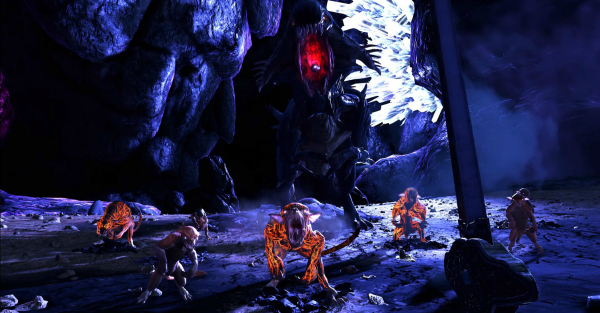 Ark: Survival Evolved has finally released from Early Access after just over two years in Beta and, despite a rather controversial price hike that doubled the game’s cost, it’s still one of the most popular video games on the market. According to Steam’s statistics page, Ark is the sixth most-played game with an average peak player count of around 100,000 per day. To ensure this continued level of popularity, Studio Wildcard recently unveiled a trailer for the first of the game’s expansion packs: Aberration.

Though there’s been some mutinous muttering about yet another cost to enjoying the full Ark experience, there’s definitely something to be said for the sheer amount of content in Aberration. The expansion is set in yet another “Ark,” which is a type of futuristic, floating planetoid in which players find themselves stranded on. Unlike the previous Ark however, which is a mix of jungles and mountains inhabited by great, lumbering dinosaurs, Aberration introduces a vastly different setting.

“Waking up on ‘Aberration,’ a derelict, malfunctioning ARK with an elaborate underground biome system, survives face exotic new challenges unlike anything before: extreme radioactive sunlight and environmental hazards, ziplines, wingsuits, climbing gear, cave dwellings, charge-batteries, and far more, along with a stable of extraordinary new creatures await within the mysterious depths.”

Also included in Aberration are a number of new features to couple with the sudden change in environment. Mentioned above are both the gliding and climbing mechanics that, from what we can tell in the trailer, will play a major part in allowing the player to explore the extremely vertical levels of the Ark. There’s also some sort of ridable monster (a common sight in Ark) called a Rock Drake that can not only scale sheer walls, but do it under the effects of some sort of invisibility.

The video description also boasts of an additional threat: an “unrelenting, Element-infused” group of humanoids that have evolved into subterranean, aggressive monsters. These creatures, simply dubbed the “Nameless,” will be introduced alongside the aforementioned Rock Drake, friendly light-providing “Lantern Pugs,” and “Cave Crustaceans” – a type of vicious, space scorpion capable of sweeping aside multiple enemies at once.

Coupled with these new monsters are around 50 new, craftable items that have been added to Ark. These largely include tools to help navigate the harsh environment of Aberration like the wingsuits, ziplines, and other various methods of travel, but will also add hazmat outfits to protect from the sun, lanterns, explosive munitions, and even railguns.

Ark: Aberration is set to release sometime this October for the PlayStation 4, Xbox One, and PC at $20. If you’ve previously purchased the $45 Season Pass, then Aberration will be added to your game library automatically when released.