Attack on Titan 2 gets a release date 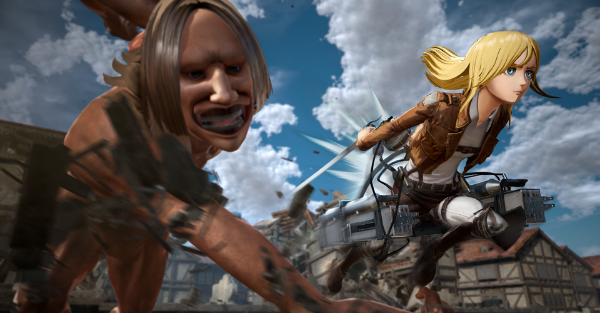 Shingeki no Kyjojin or ?Attack on Titan,? is arguably one of the most well-known modern animated series to be translated for western viewers. The show?s gritty, apocalyptic setting and frequently hopeless narrative sets it apart from a genre usually characterized by its goofy or lighthearted subject matter, to the point that even the show?s reliance on seemingly naked, flesh-starved giants for antagonists couldn?t dispel the profound sense of dread that permeates each episode.

Naturally, this has made Attack on Titan an ideal candidate for a series of video game adaptations, the latest of which just got its final release date. Attack on Titan 2 is due to launch on March 20, 2018 for the PlayStation 4, Xbox One, Nintendo Switch, and PC. There?s also a new trailer, too. Check it out:

Attack on Titan 2 was initially announced via KOEI TECMO AMERICA?s YouTube channel back in August, through which the studio previewed the game?s setting. Predictably, the game will cover the events of all 12 episodes of Season 2. Players will assume control of the characters of Eren, Mikasa, and the rest of the gang as they both respond to the events of the first season and seek to unravel the peculiar circumstances surrounding the wall that shields them from the Titans ? as well as the mystery behind the Colossal Titan, through which so much misery originated.

As for gameplay, the first installment featured the ability to control the iconic Omni-directional Maneuver Gear as players fought and slew invading Titans. Naturally this led to quite a lot of what we?ll call ?anime-fu,? in which characters were able to perform stunning displays of acrobatics and mid-air attacks quite outside the reach of normal humans. Granted, it?s video game based on a cartoon, so it?s worth giving this all a pass in the interest of entertainment.

According to the official website for Attack on Titan 2, new features include ?greater freedom of movement and precision targeting? whilst zipping through the air like a mosquito on meth ? a definite plus, given the disconcerting nature of moving in the previous game. Titans have also seen an upgrade; in a manner similar to those of the show, players will now see ?an increased variety in Titan behavior.? Some will act like slow-moving, seemingly dim-witted giants, while others will move with an unexpected speed and aggression.

For more news related to Attack on Titan 2, you can follow the developers over Twitter @KoeiTecmoUS. If you haven?t seen it already, the original trailer is also well worth a look.