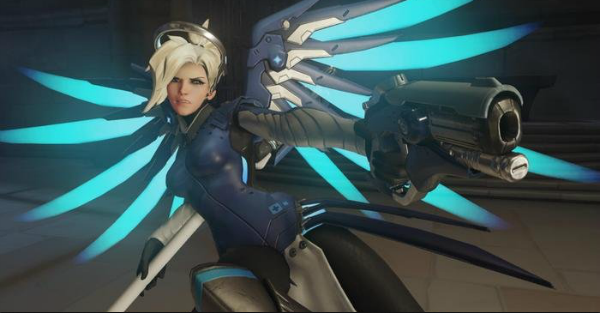 Blizzard released a significant patch to Overwatch in September that – in addition to introducing the new Junkertown map and huge changes to how D.Va performs – also majorly altered Mercy’s core mechanics. The hero’s previous “Resurrect” ability was shifted to a secondary skill with a 30 second cooldown, while the new “Valkyrie” took its place as Mercy’s ultimate. The change was implemented originally to address complaints that Resurrect had been encouraging an unpopular and unintended “hide-and-wait” playstyle that can revert an entire team’s hard-won battle in seconds.

Unfortunately, Mercy’s new changes have proven to be just as problematic; her ability to bring back one character from death every 30 seconds (or 10, should Valkyrie be active) has become invaluable, outweighing other healing-based heroes and resulting in Mercy now becoming a must-pick in competitive play. According to data retrieved by OmnicMeta, Mercy is not only the most popular hero with a 16.64% pick rate, but also the most efficient.

“Meanwhile, Mercy remains the absolute leader in dishing out healing to teammates, with at least 50% more healing done per game than any other support hero in the game. In fact, her healing has gone up 7% on average since Patch 1.15 hit live servers, while other support heroes saw little or no change.”

Luckily for players already sick of the angelic hero’s constant presence, Blizzard has already begun experimenting with changes to bring Mercy back in line with Overwatch’s other characters. A very short post by Community Manager Josh Engen on the game’s forums listed a not-insignificant change to Valkyrie, which “…no longer resets or lowers Resurrection’s cooldown. Instead it now doubles Resurrection’s range.”

This means that players who resurrect somebody before immediately activating Valkyrie will no longer have the former skill immediately reset, which previously allowed for two quick resurrections in succession.

Other changes as observed and listed by Reddit user Ilko962 include a nerf to the speed of Junkrat’s tire and an increase to Genji’s slashing speed when using his ultimate, as well as a fix to the latter that will cause Genji’s ability to continue running out when stunned, rather than cancel completely. According to Principal Designer Geoff Goodman, this is an intended change to make Genji more consistent with other, similarly-designed heroes.

All of the above changes to Overwatch can be seen on the official Public Test Realm (PTR), where the developers regularly trial new updates before launching them in full. As a result, everything is subject to change and what you read here may not be indicative of the final patch released by Blizzard.