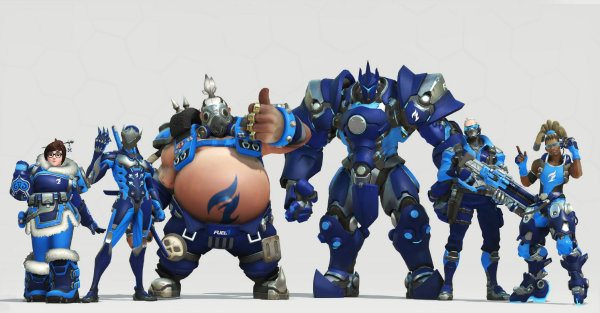 In late October, Jeff Kaplan announced via the Overwatch YouTube channel that Blizzard would soon be making efforts to increase the ?watchability? of the game?s competitive scene, and for good reason. Overwatch is, at its best, a confusing spectacle for viewers, in which numerous, simultaneously moving parts pose a challenge for even the most skilled caster to follow and provide commentary over. As a result, Kaplan revealed the addition of new, spectator-friendly features like third-person smart cameras, an automated tournament interface, and ? potentially the most exciting ? team uniforms and color palettes.

It?s this last feature in particular that has Overwatch fans talking today. According to a recent announcement over the Overwatch League Twitter account, these unique skins will not only be available to fans eager to support their favorite team ? they?ll also be obtainable via an entirely new currency system called ?League Tokens.?

As with normal sports teams, purchasing these skins or ?jerseys? will provide monetary support to the related team while ?showing off your team pride in the game.? League Tokens will be used exclusively for team skins and will bear no relevance to anyone with a less-than-passing interest in the Overwatch competitive scene. That said, there?s a skin for each of the game?s 26 heroes, meaning that even those uninterested in the League may want to play as a brilliant, firetruck-red Reinhardt for once.

The addition of team uniforms to Overwatch is only one of the many steps Blizzard has taken to transition the game?s eSports scene into something worthy of attention. Earlier this year we reported on Blizzard?s signing with two major US sporting brands, the New England Patriots and the Miami dolphins, in order to promote the Overwatch League. Not long later, the studio would announce the development of its own eSports stadium in Burbank, California.

While no concrete release date has yet been announced, we do know that the team uniforms are due sometime early next year. When they are introduced, every player in Overwatch will automatically have enough League Tokens added to their account to purchase one skin of their preferred team.

For more information, follow the League Twitter account @overwatchleague, or tune in to Blizzard?s website for future updates ? and if you haven?t seen it already, the aforementioned video from Jeff Kaplan is available for viewing below: