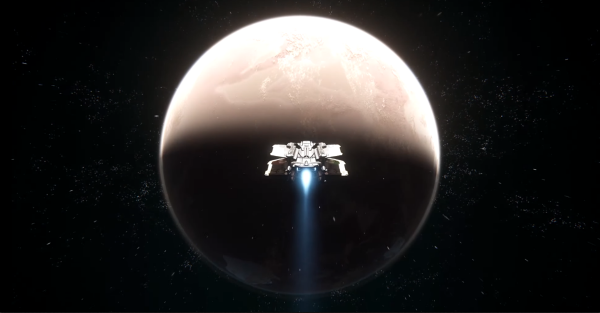 Star Citizen?s annual community meetup, ?CitizenCon,? started this past Friday in Frankfurt, Germany, and as is traditionally the case with these events, details on the studio?s flagship product were in abundance. Lead Designer and Cloud Imperium founder Chris Roberts hosted an hour-long keynote address in which he highlighted many of Star Citizen?s new features, and before we go any further we?re just going to put that below. It?s well worth a look:

Perhaps it?s just because Blade Runner 2049 has been out for less than a month, but fans of the upcoming space adventure sim have been quick to draw comparisons between the two. The first presentation of actual gameplay starts at about 11:35, and the next 5 minutes or so are spent actively wandering around the very vibrant, surprisingly inhabited spaceport. As Roberts himself states, it?s very ?Blade Runner-esque? ? there?s something of a homage to the sci-fi classic in the polluted, cluttered skies of the city. There?s nothing natural beyond the player?s fellow humans, either; between the towering clouds of smoke and the grey, jagged buildings, there?s not a hint of life. The only thing that stands out is a skyscraper-sized holographic womans that advertises 25% off of? something.

Immediately afterwards the player takes off in his shuttle, and rather than instantly take to space, the developers instead chose to show off the detail of the massive city of ArcCorp. The demonstration takes the audience through the narrow confines of the closely-situated skyscrapers, although Roberts notes that ?we?re not sure we?re gonna let you get this close.? Eventually the ship takes flight above the city to showcase its astonishing scale and beauty, all of which, Roberts promises, is ?real.? ?This is pretty much Coruscant.?

The real comparison with Blade Runner comes with every glance down towards the confined, narrow streets. One memorable shot from the new film gave the audience a glimpse at the endless, canyon-like streets that break up the vast stretches of grey apartment blocks, and Star Citizen has adopted a similar design with its city. As impressive as it is, there?s something kind of depressing about ArcCorp. You really do get the impression that, as vast as it is, anyone with enough money would be struggling to make it off-world ? just as in the Blade Runner series.

23 minutes in and the player finally takes flight to the planet?s atmosphere, where the ship approaches and docks on an orbiting space station. Not long later it takes off again, this time utilizing an 8-minute-long hyperspace travel method to appear over the planet, Lorville. While Roberts reminds the audience that it?s still a work-in-progress, the new location doesn?t fail in further demonstrating the breathtaking scale of the Star Citizen universe.

As vast as Cloud Imperium?s ambitions may be, the game?s slow development speed has nonetheless earned quite a bit of criticism over the years. Star Citizen was originally announced as part of a Kickstarter campaign back in 2012, with a planned release date only a year later in 2013. The game has since been delayed numerous times, to the point that the developers have seemingly given up on scheduling an actual launch date.

While delaying a release can sometimes be seen as a good move, the high cost of Star Citizen?s in-game ships has generated its own controversy. Players can purchase ships for anywhere from several hundred dollars to as much as a thousand. The Javelin, currently the most expensive ship in Star Citizen, is $3,000 US dollars to purchase. While all of these ships will be available free when the game officially launches, the ability to invest thousands of dollars to support the game ahead of time has made many critics wary of the slow-coming title.

Regardless of controversy, Star Citizen remains one of the largest crowdfunding projects ever, and should the developers succeed in their highly ambitious endeavors, the game will become one of the largest-scale entertainment products of all time. For more information on Star Citizen, feel free to tune in to the official website, where updates regarding the status of the game are regularly released.