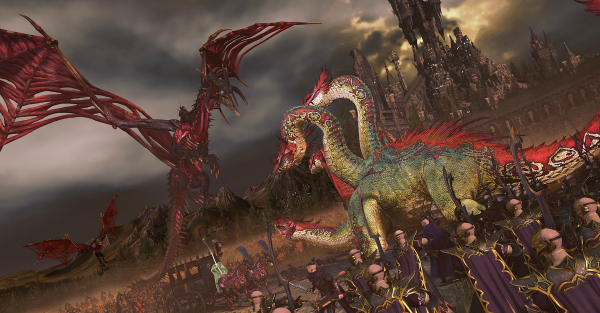 Creative Assembly (CA) recently confirmed the release date for Total War: Warhammer 2’s special Mortal Empires campaign – a massive undertaking by the studio that will combine the first two installments into one huge map. The campaign, which is set to release in just under a week, will include 35 different Legendary Lords set across 12 playable races, 352 unique unit types to field with their own custom abilities and skills, and 295 settlements for players to discover and conquer. It’s easily the most content-dense DLC ever released by CA and, more impressively, the entire campaign will be available completely free for owners of both games.

As part of the studio’s marketing campaign, CA today released a new trailer for Mortal Empires. There’s not much news to it; we’ve seen glimpses of the map, and by now fans are already long familiar with the various different factions in Warhammer – but that said, there’s still something kind of awesome about seeing Malekith march up to challenge Grimgor, even as Karl Franz confronts Mazdamundi in Lustria.

Despite the lack any real new developments, a couple of additional details have managed to leak out. For starters: the Warriors of Chaos, who acted as the original end-game antagonists in the first installment, will return as the primary enemies of Mortal Empires – assuming you’ve dealt with all the other factions first, of course. This time, however, Chaos won’t just be invading from north of Kislev; the bringers of the End Times will attack from multiple different directions.

You’ll still experience the escalating Chaos Warriors invasion from the original Total War: WARHAMMER Old World campaign, but with an exciting new twist: the forces of Chaos don’t just attack from the Chaos Wastes, but from other, unexpected directions as well…

Coupled with Mortal Empires will also be the arrival of the Blood for the Blood God DLC pack, which stirred up some controversy when it launched for Warhammer as an optional $2.99 purchase. As a way of making amends to the studio’s fans while also maintaining a T for Teen ESRB rating, this time the pack will be free to those who already bought it the first time.

Total War: Warhammer 2 – Mortal Empires will launch on October 26, 2017 as a free download for all players. Feel free to visit the Steam page for more information, or check out our previous articles on the game, which have covered everything from upcoming DLC to the latest and greatest releases from Creative Assembly.