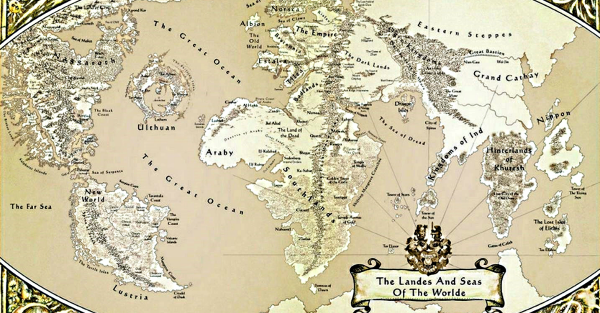 Creative Assembly’s (CA) Mortal Empires campaign is probably one of the more major undertakings in the studio’s history, and will result in the largest and most varied setting ever set in a Total War game. With 13 different races set across 25 separate factions – each with their own unique units, legendary lords, starting positions, and campaign mechanics – the combined campaign is already shaping up to be one of the most anticipated releases of the year. Yet, for all the excitement, it wasn’t until quite recently that fans were given any real hints of what’s to come.

In an interview with Total War: Warhammer 2 Game Director Ian Roxburgh, CA revealed some new details on the upcoming launch – including a partial screenshot. The below image previews the new location of the island of Ulthuan, home of the High Elf faction and centerpiece of Warhammer 2’s vortex campaign. Check it out:

While interesting enough on its own, the screenshot carries its own significance to the Total War community, which last year received a number of leaks related to the studio’s long-term plans for the Warhammer franchise. Specifically, the leak – which originated from an article on TotalWars.ru – contained an early screenshot of how CA intended Mortal Empires to look, and as Reddit user /u/whatiwasonce was quick to point out, it seems to line up perfectly with today’s reveal.

In response to being asked about the leak’s accuracy, Roxburgh confirmed that it’s “Pretty bang-on to be honest,” though he added that the original image does little justice to the sheer amount of content included in Mortal Empires. Regardless, the confirmation has only further upset many fans, who have expressed disappointment in CA’s decision to cut off huge portions of the continents of Lustria, Naggaroth, and the Southlands.

That said, Mortal Empires isn’t going to only cut away old content. According to the interview, the combined map with not only include both settings of the Old World and the New, but also “a massively expanded Southlands area,” which is the only landmass that makes physical contact between the two regions.

Other points of interest include the changes to the starting positions of both Queek Headtaker of the Skaven and Teclis of the High Elves. The former will now start at Karrag Orrud, a settlement near the bottom of the World’s Edge Mountains, while the latter will now begin his campaign at the Star Tower off the east coast of Lustria. In addition to the above, all UI improvements of the sequel will make appearances in the combined campaign, as will the inclusion of new mechanics like rogue armies and universal territory capture.

Mortal Empires is set to launch at the earliest on October 26, when it will arrive free for owners of both Total War: Warhammer 1 & 2. For more information about the series, check out our selection of articles on the subject, or follow the developers over Twitter @CAGames.