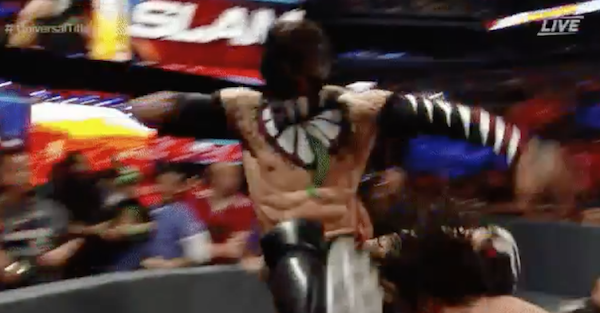 UPDATE: WWE has since confirmed the injury.

?He hit the wall during the match, dislocated his shoulder and was able to put it back in himself in a split second,? said ringside physician Dr. Chris Robinson. Bálor was able to finish the match, but Dr. Robinson noted that an MRI yielded results earlier today showing ?a possible labrum tear.?

Finn Bálor’s upset at WWE Summerslam handed him the first-ever WWE Universal title, but his run might be short-lived.

Related: Wrestling got real when Brock Lesnar cut open Randy Orton the hard way with nasty elbows to the head

According to Wrestling Observer, Bálor may have suffered a shoulder injury when he was power bombed into the barricade. The report notes there’s a fear Bálor might have to undergo surgery and it could keep him out of action for an extended time, requiring a major shift in creative plans.

If Bálor is injured, it comes at the most inopportune time, as he was enjoying a push directly to the top of the company after bouncing from NXT.

If Bálor is injured, he would join Randy Orton as two top stars who left Sunday night with their fair share of bruises.

This isn’t the first time a Seth Rollins power bomb has injured a WWE star.