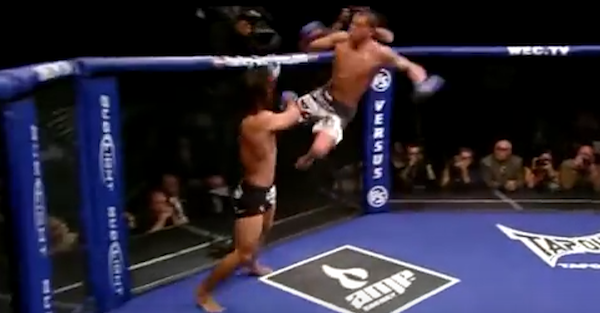 The final World Extreme Cagefighting event before their merge with the UFC gave us one of the most memorable moments in MMA history.

Pettis would battle Henderson to a unanimous decision victory, but his fight will mostly be remembered for this insanity:

“Showtime” would go on to lose by decision in his UFC debut against Clay Guida (Edgar-Maynard went to a draw, forcing a rematch).

Pettis later won the belt at UFC 164, where he submitted Henderson. He would successfully defend his belt once (against Gilbert Melendez) before losing to Rafael dos Anjos.

Related: Anthony Pettis disrespected Max Holloway before the fight, and paid for it in a TKO featherweight title loss

Pettis attempted a drop down to bantamweight at UFC 206, and lost by TKO to Max Holloway.