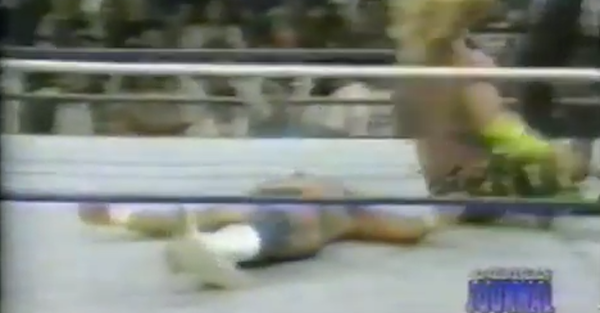 In December of 1990, after just six weeks of training Chuck Austin was slated to play a jobber (an opponent easily beaten) alongside Randy Savage’s brother, Lanny Poffo against The Rockers, Marty Jannetty and Shawn Michaels.

What followed left Austin paralyzed and resulted in WWE/F paying $10 million to the inexperienced wrestler.

Late in the contest, Jannetty hit his finisher, the Rocker Dropper, and Austin’s head hit the mat, reportedly breaking his neck instantly.

What followed is incredibly disturbing, as Jannetty rolled Austin despite the novice wrestler explaining he couldn’t move and his neck may have been broken. An unaware Michaels was tagged in and landed a diving headbutt before covering Austin for the win. According to a report from the American Journal, Austin laid motionless in the ring for more than 20 minutes following the contest:

Austin reportedly sued Titan Sports and the Rockers for $3 million, per Ring The Damn Bell. WWF attempted to plead their case in court, going as far as to having wrestling mats brought into the courtroom and having Jannetty perform his move on a young Dean Malenko.

WWF appealed the decision, but still handed over $10 million, according to the report.

Austin recovered enough to have limited use of his arms, but is wheelchair bound. He reportedly suffers uncontrollable spasms and immense pain. According to a report from 2015, via Wesh, Austin wasn’t able to obtain prescription medication due to rules and regulations in Florida.

WWE now monitors these situations much better, hiring experienced talent and having medical personnel at ringside.