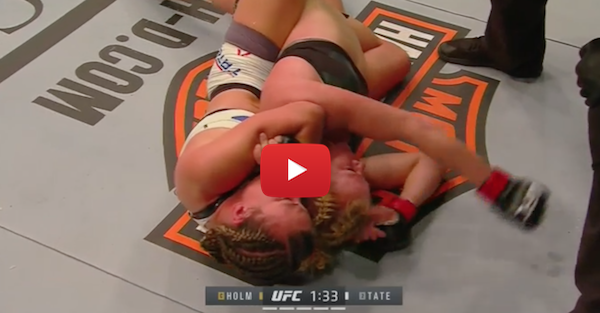 Months after shocking the MMA faithful with an upset over bantamweight champion Ronda Rousey in November, Holly Holm (10-1) fell victim to a rear-naked choke out by contender Miesha Tate (18-5) Saturday night at UFC 196 in her first title defense.

Holm, a boxer and kickboxer, faced a unique challenge in Tate, whose ground game was one the champ hadn’t faced before.

The fight started much like the Rousey bout, with Holm countering with vicious punches that battered Tate early. In the second, Tate was aggressive, taking Holm down and controlling the ground with seamless transitions before the contender took back position and looked to have Holm done with a rear choke. Instead, the champ survived and moved to the third round.

After a slow-paced third round, where the two cautiously traded blows, Holm stuffed Tate over and again with takedown attempts as the champ focused on her technique and less on throwing knockout blows. Tate got a huge takedown with less than two minutes in the final round to choke out Holm.

Tate previously lost both of her bouts against Rousey. This was Holm’s first loss.