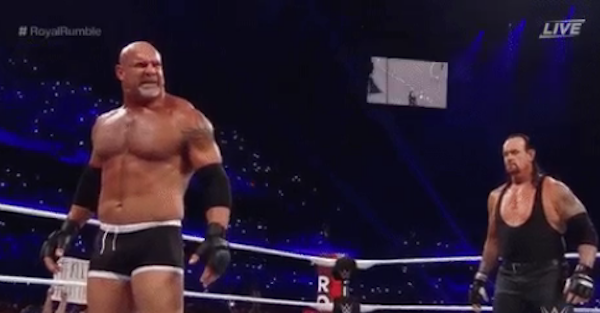 During Sunday night’s Royal Rumble event, WWE started planting seeds for the lead up to WrestleMania 33 in Orlando, Florida.

According to Wrestling Observer’s Dave Meltzer, current storylines have Roman Reigns set to face off against The Undertaker and Goldberg battling Brock Lesnar in a WWE Universal championship match.

Although Braun Strowman cost Reigns the WWE Universal championship, the two are only expected to face off against each other at events leading up to ‘Mania. One key moment in the Royal Rumble match is expected to culminate in the Deadman facing off against Reigns.

On the other hand, Goldberg is expected to challenge and beat Kevin Owens for the belt at WWE Fastlane in early March before defending the belt against Lesnar at the granddaddy of them all, WrestleMania.

It will be the third encounter between Goldberg and Lesnar. Goldberg has run through Lesnar twice in recent months, first at Survivor Series and then Sunday night at the Rumble:

The Rumble signals the official race to WrestleMania, but plenty can change in the coming months.