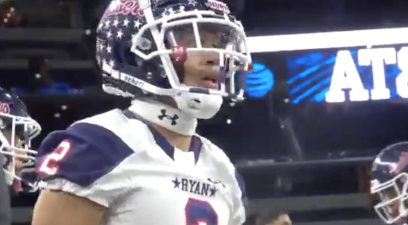 Nothing beats a good high school football trick play. They seem to just come out of nowhere and catch us all by surprise. When they work, the highlight lives forever and watching this one from a JV game in California never gets old.

After a loss to Taft the week before, the El Camino Real junior varsity football team was looking to spice things up a bit against Reseda Cleveland. Head coach Brandon Holmes and offensive coordinator Ali Mirbaha worked together to come up with a masterpiece back in 2013.

Then, on the first play of the game, the “Wrong Ball” trick was called, and the result was an easy 80-yard touchdown.

The video from MaxPreps.com was trending and went viral across the United States in a hurry. How could it not? The quarterback pretending it was the wrong ball made it once of the most unique trick plays around. It has nearly three million views on YouTube alone.

Lined up under center, freshman quarterback Jahlil Pinkett — the nephew of actress Jada Pinkett-Smith — casually took the snap and jogged over to the sideline and complained it was the wrong ball. Then, without hesitation, Pinkett took off and there was no one around to stop him.

“We put in some fun plays to keep them interested,” Holmes said. “Everyone is acting like it’s the wrong ball. The center had to hand the ball legally. The team was surprised. No one really reacted until he was 30, 40 yards ahead.”

This really might only work in a JV game. It would be nearly impossible for an NCAA or NFL team to get away with it. However, it was brilliant, beautiful, and is the perfect throwback video.