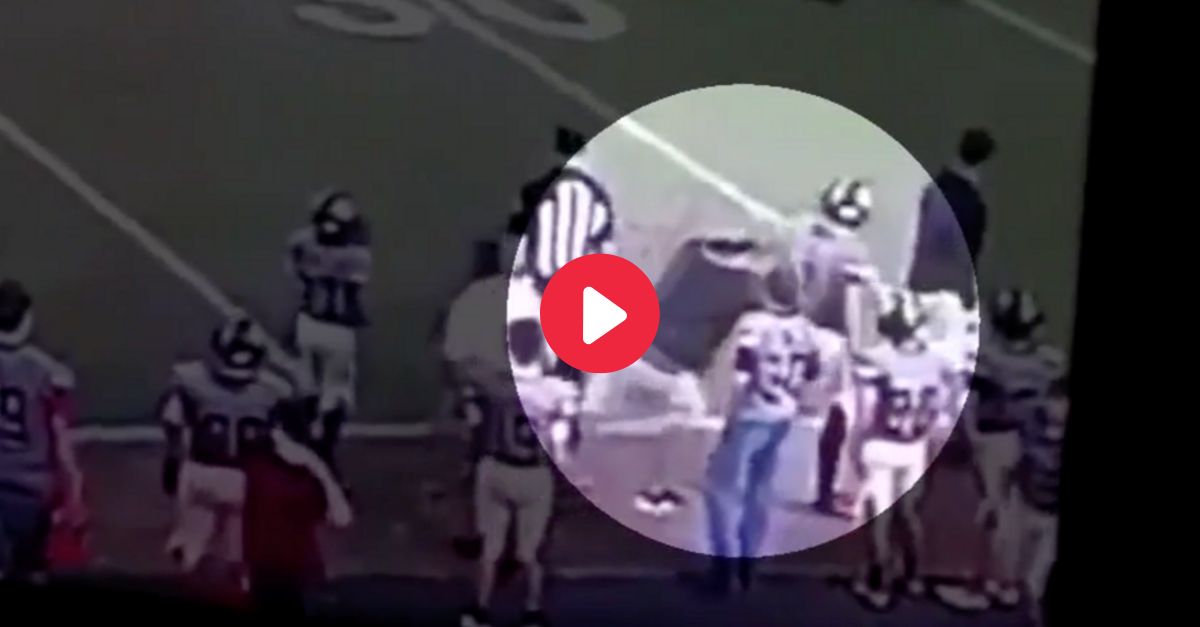 A couple of weeks last fall were rather unsettling for the Elba, Alabama community, especially the Elba High School football team. The team?s head coach, Pate Harrison, was on administrative leave following an incident on the sideline during a junior varsity game. But just when things had started to quiet down some, a major decision was made.

During the game on September 16, 2009 Harrison?s son approached the sideline, but didn?t really stop to talk to his dad. So he started walking away. Suddenly, seconds later, video obtained by WDHN Dothan First shows Harrison running, pushing away another player, getting past the official, and shoving his son in the upper back and neck area.

Of course, the video went viral on various news outlets, and all eyes were on what would happen next. Then, following a ?special-called meeting,? head coach Pate Harrison submitted his resignation to the Elba City Schools and Elba City School Board, according to The Dothan Eagle.

Here is a video of the incident on repeat:

Pate Harrison took over at Elba High School at the start of the 2018 season. He complied an 11-4 overall record, including a 3-1 start last year. He even guided the Tigers to the Class 1A state playoffs in his first season. However, his tenure as a coach and teacher at the school is officially over.

So what happened? What caused the coach to snap at the young man? He wrote a Facebook post explaining after the video surfaced.

?By now most of you have heard that I embarrassed myself, the Elba football program, and my family. In 14 years of coaching I have never truly lost my cool until my own child told me to shut up. That is no excuse for me snatching him up, and I apologize to everyone who was there to witness this event. I am truly sorry that my actions has put the team in a bind and the extra work on the coaches. The program is bigger than any one person and I know the team will continue to be successful.?

Glen Johnson, a longtime assistant who served as the interim head coach, was assigned to lead the Tigers for the rest of the season.

?Our thoughts and prayers are with the Harrison family, but we have to move forward and do what is best for the kids, the city of Elba and the school system,? Johnson said.

According to The Dothan Eagle and Superintendent Chris Moseley, Pate Harrison?s resignation as the Elba football coach at the school board meeting that Monday morning was not forced. He did it on his own.

At the end of the day, everyone learned a lesson. One moment of mental lapse can end a tenure in the snap of a finger.

Pate Harrison was looking for a second chance. He wanted to put the past mistakes behind him and will return to Alabama with the hopes of a fresh start.

Harrison was hired by Rehobeth High School and looks to return to his winning ways.

?I?m sure there will be a whirlwind of social media kick back up of what happened, but I?ve just moved past all of that and I hope everyone else does too and we have a fresh start there at Rehobeth,? Harrison told The Dothan Eagle.

This post was originally published on October 2, 2019 before updating with Harrison’s new job.

MORE: HS Coach Threatened, Accused of ?Running Up the Score? Steps Down