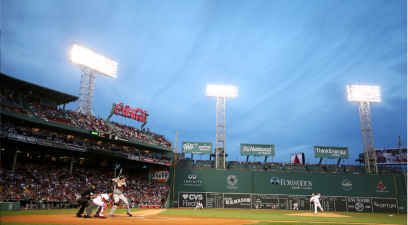 The 14 Oldest MLB Stadiums Still in Use Today are Iconic Major League Baseball starting pitcher Cole Hamels has enjoyed a decorated career as a pro, having played 15 seasons in MLB. The 2008 World Series MVP battled injury in 2020, but is looking to return to the mound in 2021.

While Hamels is currently a free agent, the 37-year-old is seeking another chance in The Show, and has the competitive edge to continue pitching, even at his age.

Hamels isn’t the only one with a competitive nature in his family, however. The veteran hurler married a former Survivor contestant, and the pair started a family together.

Cole Hamels met his wife Heidi Strobel after she threw out of the first pitch at a Clearwater Phillies game in 2004 in Clearwater, Florida, back when Cole was still a minor-league pitcher.

The pair were married in 2006, in Heidi’s hometown of Springfield, Missouri.

Heidi Hamels attended college at Drury University, and shortly after was a contestant on the popular television show Survivor in 2002, appearing on the season “Survivor: The Amazon” and finishing in fifth place.

On the show, Heidi was best known for stripping naked during a challenge in exchange for oreos and peanut butter.  She was in an alliance with the season’s eventual winner, Jenna Morasca, with whom she’d later pose nude alongside in a photoshoot for Playboy.

Heidi and Cole Hamels made a remarkable donation to Camp Barnabas, a charity that provides “unique Christian experiences to individuals with special needs and chronic illnesses, as well as their siblings.”

The Hamels’ clan donated their beautiful mansion at Table Rock Lake, worth $9.4 million, to the organization in what was a touching gesture.

Additionally, Heidi and Cole founded the Hamels Foundation, which is “dedicated to enriching the lives of children through the power of education by giving them the tools they need to achieve their goals.”

While the foundation primarily operates in Philadelphia, they also work with children overseas, in countries including Thailand, Turkmenistan and Malawi.

Heidi and Cole Hamels have four children together, sons Braxton and Caleb, and daughters Reeve and Mackenzie. The Hamels adopted Reeve during a trip to Africa via the Hamels Foundation. Reeve was adopted from Ethiopia in 2012.

Hamels, who was born in San Diego, debuted in MLB as a 22-year-old with the Philadelphia Phillies, and spent the first 10 years of his professional career there. He made three All-Star teams in Philly, and won the World Series with the club in 2008, earning World Series MVP honors, as well as being named NLCS MVP.

Hamels left Pennsylvania after being traded to the Texas Rangers in 2015 in exchange for a handful of minor-leaguers. He would spend four years in Texas, making his most recent All-Star appearance in 2016, before being dealt to the Chicago Cubs in 2018.

The veteran played two seasons in Chicago before signing with the Atlanta Braves on a one-year deal in 2020, but made just one start for the club due to injury.

According to Celebrity Net Worth, Hamels boasts an estimated net worth of $60 million. Per Spotrac, Hamels has made more than $203 million through career earnings as a professional baseball player.

MORE: Andrew McCutchen Proposed to His Wife on ?Ellen?