UFC Fighter Disrespects Opponent’s Family, Then Pays for it Dearly 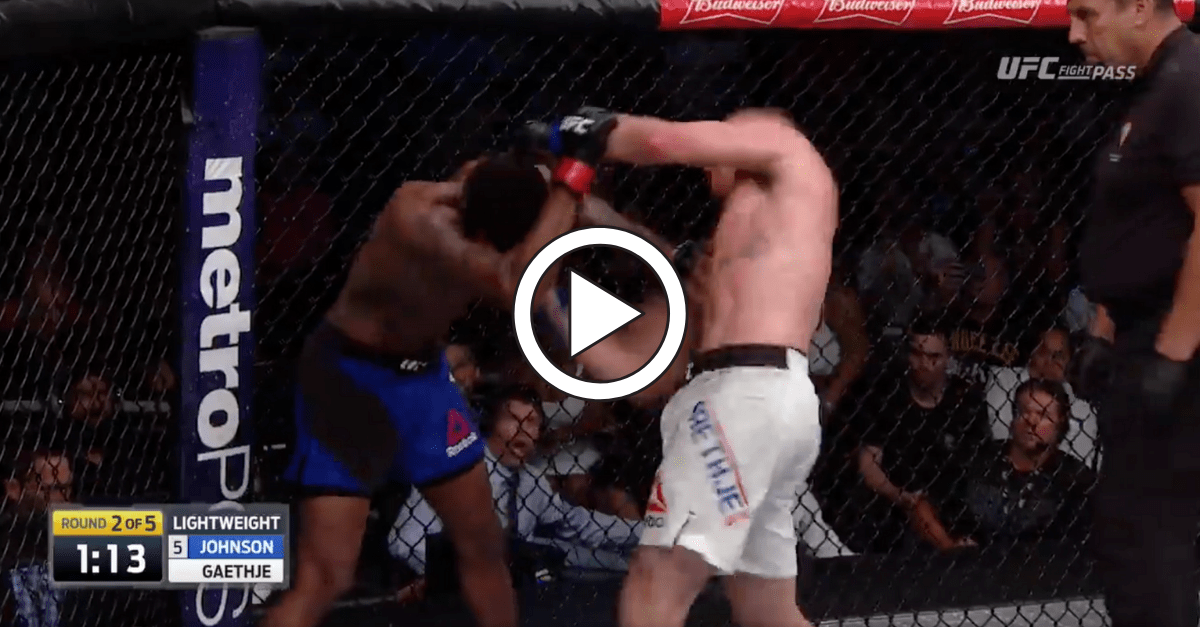 Leading up to 2017’s The Ultimate Fighter finale, Michael Johnson did plenty to disrespect Justin Gaethje and his family.

Unfortunately for Johnson, his fighting didn’t back up his trash talk, as Gaethje (18-0) punished Johnson (17-12) into submission, earning a TKO victory in the second round.

The bout is one of the best in UFC history, rivaling the very first Ultimate Fighter Finale’s showdown between Stephan Bonnar and Forrest Griffin.

The two refused to touch gloves before the bout and Johnson was aggressive from the bell, striking with hard right and left hands in succession. He stumbled Gaethje early, but the unbeaten contender came right back.

Johnson had Gaethje hurt late and had him rocked against the cage:

WHAT IS GOING ON

Gaethje survived the first frame, and all in all they traded more than 70 punches in the round. The second round started with much of the same before both guys gassed out.

Legs kicks set Gaethje up with punishing blows to the head, as he backed his opponent up and spent the second half of the fight waiting for Johnson to get up off the canvas.

OHHHHHHHHH @Justin_Gaethje has rocked Johnson!!! OH MY GOD WHAT IS GOING ON IN THIS FIGHT!!! #TUFFinale pic.twitter.com/I4KPDtPAcs

It was clear “The Menace” had had enough, but a knee to the chin and a few more strikes gave referee John McCarthy a reason to stop the fight.

In May before the fight, Johnson said Gaethje was “out of his league.”

That led to trash talk leading into the bout, as Johnson said Gaethje was “incest” and asked if his mom had sex with his brother or her cousin:

Gaethje’s response wasn’t the best in the world, but he certainly answered in the Octagon.

This article was originally published July 8, 2017. It’s a friendly reminder that if you’re going to talk a big game, you better back it up.

MORE: Fighter Knocked Out in 5 Seconds, Then Choked Out by Ref