A car mysteriously explodes during a NASCAR race, and no one knows why 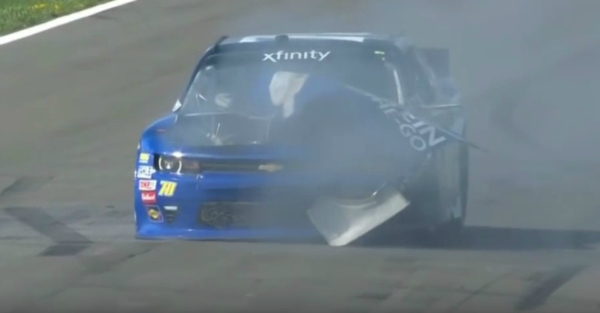 Explosions during NASCAR races aren’t commonplace, but they happen often enough that they’re not rare, either. When an explosion happens, finding a cause usually isn’t difficult — like fuel tank ruptures after a crash.

But Derrike Cope’s No. 70 Chevrolet blew up seemingly out of the blue in a NASCAR XFinity Series race yesterday. Cope was driving slow through a bus stop when the engine exploded. Motorsport said Cope was injured.

Cope, who’s been racing for 35 years, told NBC Sports after the race he’s never seen anything like it before.

“I just went easy down there and got off the end and started coming to a stop, and the whole thing just blew the hood off,” Cope said. “I don’t know really what it was.”

NASCAR says it has impounded the car and will investigate to try to determine the cause. Some, including Rodney Childers, the crew chief of Cup Series driver Kevin Harvick, took to Twitter with their guesses to the cause.

Looked like the brakes got way too hot and made the front tires blow out.. Crazy huh https://t.co/kQrsa2UqXF