The World’s Longest Backflip Shot Blew Everyone Away 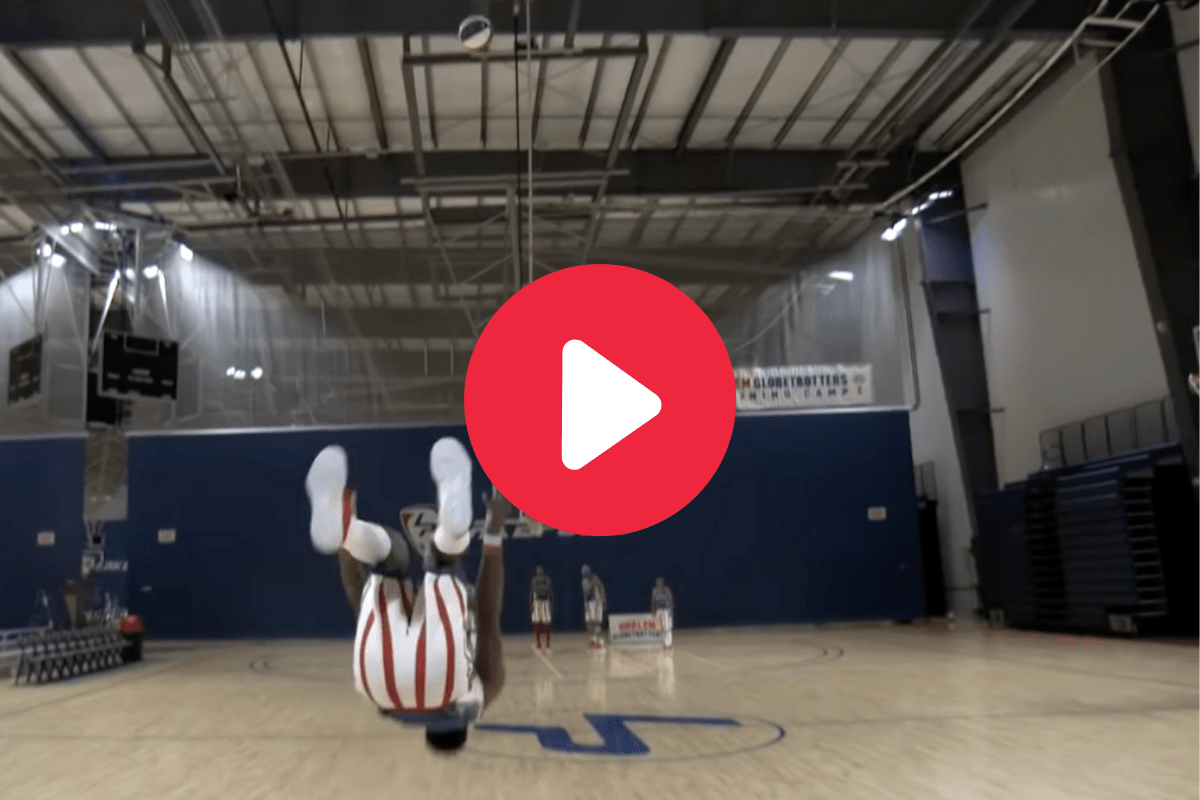 While not quite as popular as the NBA’s Instagram, the Harlem Globetrotters remain a model of consistency, comedy and downright incredible athleticism. Since originating in the south side of Chicago back in the 1920s, the Globetrotters have played thousands of exhibitions entertaining crowds all over the world.

It’s only fitting that on November 8, 2018 as part of Guinness World Records Day, the Globetrotters set out to one-up themselves once again. The team broke five world records, and while each one is more impressive than the next, none of them can touch an incredible 58-foot backflip somersault shot.

Get up and stretch, pick up your own iconic Harlem Globetrotters Outfit, and (so it’s stuck in your head for the rest of your day) fire up the Globetrotters theme song, Brother Bones’ whistled version of “Sweet Georgia Brown.”

Most Under the Leg Tumbles in One Minute: 30

For starters, not only did Torch George, a 5-foot-3 guard who played at Purdue before transferring and graduating from Oklahoma City University, set this record and make me nauseatingly dizzy in the process, she became the first woman to break a world record as a member of the Globetrotters. I definitely don’t plan on trying to break this one.

Most Behind-the-Back 3-Pointers in One Minute: 3

Now, he’s out here breaking every obscure basketball Guinness World Record there is. Zeus hit a ridiculous five behind-the-back 3-pointers in one minute, and also went for another one on the very same day…

Most Blindfolded Dunks in One Minute: 5

If dunking a basketball blindfolded wasn’t hard enough, Zeus had to walk back to the free throw line after each attempt. Don’t worry though, he’s a veteran: the 6-foot-8 Globetrotter also owns records for most dunks in one minute (16) and most bounced 3-pointers in one minute (5). Add another two to his collection.

This one is just mind-blowing. Bull Bullard, a 2008 Globetrotters draft pick and the pride of Texas A&M University-Corpus Christi, not only hit this trick shot from 58 feet, he did it backwards while also landing a perfect standing backflip.

Bull made the college slam dunk championship at the 2008 Final Four and entered American Ninja Warrior, so he’s a lot more than just a 58-foot backflipping, shot-making whiz, but this one is definitely an all-time career highlight.

Most Under-the-Leg Dunks by a Team Using a Trampoline: 28

To cap the record-breaking day of breaking records, the new Flying Globies acrobatic team set the Guinness World Record for most trampoline dunks while putting a basketball between their legs in mid-air. The five man team managed 28 of them, bookending the Harlem Globetrotters day with their fifth world record.

Now, get your own Suddora Striped Sweatband Set, some lessons on how to do a backflip, and see if you can break any one of these incredible records. If you can, maybe you’ll get the chance to picked by the Globetrotters in their annual draft?

I mean, both Tim Tebow and Johnny Manziel were picked.

This post was originally published on November 10, 2018 but this is the world’s longest backflip shot. That’s forever. Until someone breaks the record.