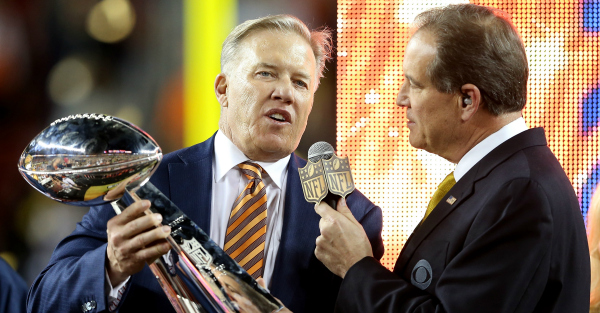 Denver may have lost one of the NFL’s all-time greatest quarterbacks in Peyton Manning, but another all-time great thinks the team is better now than last year.

John Elway, Denver’s general manager, told the Denver Post he thinks the 2016 Super Bowl champs got better in the offseason by adding several players. Among the new additions are veteran quarterback Mark Sanchez and in a way of addition by subtraction, Trevor Siemian, who Denver drafted in 2015.

“Did we get better as a football team? I believe we did,? Elway said. ?And the other thing is, when people are doubting you, it adds that incentive. We?re kind of in that situation right now.”

Sanchez and Siemian are competing to replace Manning. The team released its first depth chart of the season Monday and named the two quarterbacks co-starters. Elway said he’s confident either quarterback can lead the team. Both are expected to see significant playing time in Denver’s first preseason game on Thursday at Chicago.

The Broncos have held on to most of last year’s defensive starters (including All-Pro linebacker Von Miller) and will look to lean on the unit while its offense finds an identity. The team also added rookie safety Justin Simmons and veteran defensive end Jared Crick.

RELATED: Broncos could turn to a guy who hasn?t thrown an NFL pass instead of lowly Mark Sanchez

Elway led Denver to back-to-back championships in 1997 and 1998 and will now try for a repeat as a front office man. Denver opens the 2016 season against Carolina in a rematch of last year’s Super Bowl.