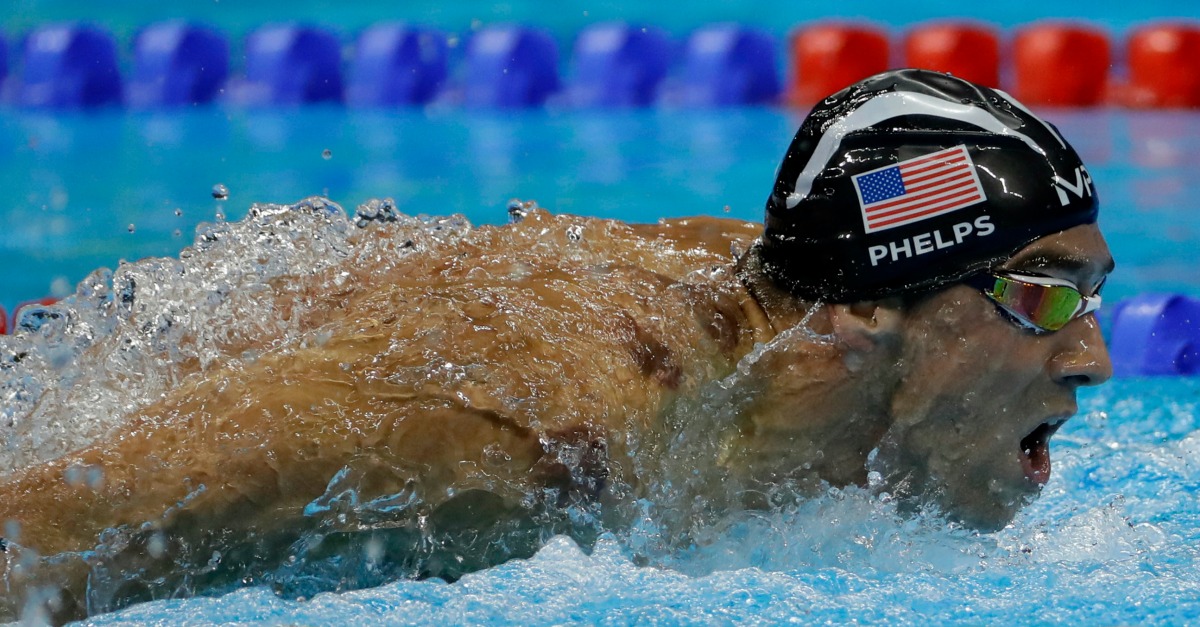 Michael Phelps is known to spin some Eminem in his pre-race playlist. Perhaps that’s what he was listening to Monday when cameras caught him glaring at his rival, South African swimmer Chad Le Clos, as the two prepared for a qualifier in Rio.

RELATED: Michael Phelps put personal struggles behind him and will carry the U.S. flag at the Olympics opening ceremony

Phelps has said he listens to a combination of Eminem, Young Jeezy, and Eric Church to get his mind right before races.

Maybe he was “losing himself” in the music and the moment when Phelps shot a deadly look at Le Clos as he shadowboxed while Phelps sat.

The #phelpsface photo set the internet ablaze with a plethora of memes and jokes about the look.

So that's what Phelps was mad about.. 😂https://t.co/h9wGSt2PDX

When commentators give credit to the Olympian's husband instead of the *actual* Olympian for her win. #PhelpsFace pic.twitter.com/ihYAPa9l8h

When another cashier opens and says "I can help the next person in line" & someone behind you goes over #PhelpsFace pic.twitter.com/KNEGuRDKnm

when ur crush's significant other is at the party pic.twitter.com/KJ0N10brb5

When the priest stops hearing confessions right before it's your turn #PhelpsFace pic.twitter.com/i7ceoI3bcl

When you're trying watch a 5 second video, but have to watch a 30 second ad first #PhelpsFace pic.twitter.com/6GDQSMFt8V

When your mom won't let you have any fruit snacks. #PhelpsFace pic.twitter.com/k2E33oslu9

When you forget to check and yep you're out of toilet paper.#PhelpsFace pic.twitter.com/iNqyK37zGx

When you find out that the 5 page paper you just finished was optional…#PhelpsFace pic.twitter.com/wzE9FhGicM

When the people in front of you keep talking during the movie. #PhelpsFace pic.twitter.com/hZ288dGYao

It looks like that mean mug is part of Phelps’ DNA; his son, Boomer, has inherited it, too.

In 2012, Le Clos handed Phelps his first international loss in a decade. Despite that defeat, the two were cordial enough outside of the pool to go on a shark cage diving trip in 2013.

RELATED: Why is Michael Phelps covered in purple circles? We’ve got the answer

The two face off Tuesday night in the 200M butterfly.