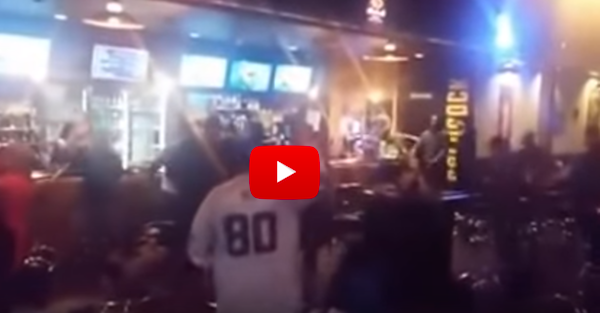 Moments like these show how sports and alcohol sometimes isn’t the best mix. A bar in Herespia, Ca. in San Bernadino County called Whiskey Barrel Saloon saw a pretty vicious brawl breakout during Super Bowl 50. According to Victory Valley News, at least thirty people were involved in the brawl, according to a witness who was on the scene. Another witness, per scanner traffic, claimed that upwards of 100 people were involved.

According to the San Bernardino County Sheriffs Department said that there were about 12 subjects involved in the fight and the fight did appear larger due to several others attempting to break up the fight. The bar fight reportedly escalated when bar stools were thrown and mace and tasers were being used. Deputies arrived just before 8:00 p.m.

The crowd dispersed and the fight subsided when deputies arrived according to VVN. Five ground ambulances were requested for four patients and triage for a fifth.

Following the events, four were arrested for assault with a deadly weapon after witnesses were interviewed and video surveillance was reviewed.