Ronda Rousey was the absolute it-girl in her heyday. She earned the nickname "Rowdy" because the boulder-shouldered bad-ass chick was a fearsome competitor in the octagon. But the former MMA fighter cleans up well and has no problem stunting a dress on the red carpet or dropping jaws in a bikini.

MMA fans grew to quickly know Ronda Jean Rousey's name when she began fighting for the UFC. She won the organization's first ever women's fight in 2013. Her reign as queen of the UFC raged on until Holly Holm shocked the world and took down the former UFC Women's Bantamweight Champion in 2015.

By then, Rousey was already an international sensation. Her stardom extended beyond the octagon. She hit the big screen for roles in Charlie's Angels (2019), Furious 7 (2015), The Expendables 3 (2014) and American Judoka (2009). She's written books, starred in commercials, became a WWE diva and piled up a hefty savings account after her fighting career.

The beautiful former UFC champion has also ditched the clothes and posed naked for magazines. However, her ex-boyfriend found out the hard way to ask permission before hosting a risque photoshoot with Rousey.

Ronda Rousey Beat Up Ex-Boyfriend Over Her Nudes 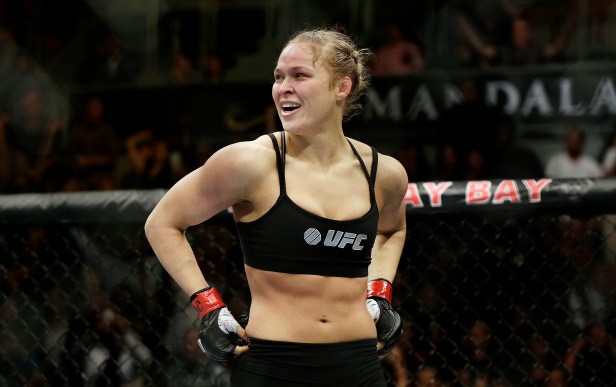 RELATED: From UFC to WWE, What is Ronda Rousey's Net Worth?

She revealed in 2015 in her autobiography, "My Fight / Your Fight" that she once beat the snot out of an ex-boyfriend when she found out he was taking nude photos of her. She confronted him and um, "handled" the situation, which happened to take place right before the Rousey-Meisha Tate fight in 2013.

"I deleted the photos. Then I erased the hard drive. Then I waited for Snappers McCreepy to come home from work. I stood frozen like a statue in his kitchen, getting angrier and angrier. I started cracking my knuckles and clenched my teeth. The longer I waited, the madder I got. Forty-five minutes later, he walked in the door. He saw my face and froze. He asked what was wrong and when I didn't say anything, he started to cry. I slapped him across the face so hard my hand hurt," she wrote in the book.

She went on to say she got in her car to drive away and he followed her. So Rousey dragged him out of his seat onto the sidewalk and sped off.

You can read more about Ronda Rousey's wild stories like this one in her best-selling book, "My Fight / Your Fight" by buying the book below.

Rousey said the incident stirred her to pose naked in the ESPN Body Issue. She appeared on the cover of the 2012 issue.

"ESPN asked me to be part of their annual Body Issue, where they convince athletes to pose buck-naked. I figured if there was any possibility of naked pictures of me getting out, I wanted it to be on my own terms, and being part of a spread of the world's best athletes seemed a tasteful way to do it," she wrote in the book.

Rousey "Loves To Walk Around The House In The Nude"

It might have nothing to do with the incident involving her ex-boyfriend, but Rousey is apparently a big fan of walking around her house in her birthday suit.

"There would be times where I would come home from school or work or wherever, and she would just be sitting at the counter eating butt-naked," Harrison said. "She's like, 'What? I feel most comfortable like this.'"

So there you have it. Ronda Rousey is a big fan of being naked and doesn't mind going full frontal for magazines. But it better be with under her permission. Or else.

MORE: Torrie Wilson's Playboy Edition is Still a Must-Have for Many WWE Fans