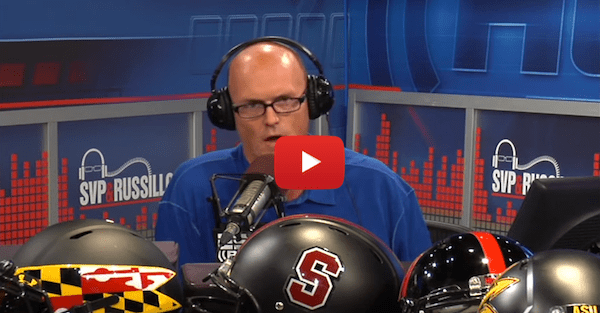 ESPN is going the way of late-night talk shows with its announcement of Scott Van Pelt as the man to head the midnight special edition of “SportsCenter.” The announcement was made Tuesday at ESPN’s Upfront presentation, which is a showing for ESPN to let advertisers know what shows they will have in the coming months. And with the new gig came an extension for the Bald Man on Campus.

ESPN has been wanting to venture into late night talk show TV and almost had former “Saturday Night Live” member and chief writer Seth Meyers until he bolted for his own late night show that he inherited from Jimmy Fallon. Van Pelt?s new late-night responsibilities mean that his afternoon radio show with Ryen Russillo will be coming to an end when SVP takes over the midnight ?SportsCenter? in late summer, the network announced. The new ?SportsCenter? will incorporate some elements of the radio show though. Van Pelt got a lot of love for his work over the past six years on the show from some pretty big fans.

Thrilled to hear about @notthefakeSVP's upcoming midnight show on ESPN (go Scott!), but I will miss @SVPandRussillo. Terrific radio.

.@notthefakeSVP is the rare talent in the sports media world who can flourish in just about any viable format. https://t.co/cUR3B4I0ye

The best. Samesies. RT @WorldofIsaac: .@notthefakeSVP is one of the good guys. Pumped for his version of SportsCenter.

The mentions today are really overwhelming. I always knew you guys had our backs but this is beyond… I don't even know how to say thanks

Van Pelt also explained on his show how it all came about and gave his thanks to all the people who made his show possible. It’s really a touching tribute so check it out.